In the wake of the Rojava Revolution, many western leftists have engaged in solidarity actions and other forms of support. As a Communalist residing in Vancouver, I have attempted to support the revolution by working with Kurdish House Vancouver to organise events to raise awareness, such as discussion panels with international volunteers Hanna Böhman and Cody Bergerud, as well as documentary screenings.

Those paying attention to these kinds of efforts have likely heard of Rojava Plan. It was a resource that sought to facilitate bringing internationalists to Rojava to work with civil society groups there, collect donations, and a variety of other projects. This article outlines what I believe to be a case of alt-right entryism into Rojava Plan and Rojava solidarity efforts more generally through the actions of an individual named Amir Taaki. Although focused on the Rojava Solidarity movement, it illustrates a problem that has surfaced in other movements as well.

My concerns regarding Taaki began to surface after noticing their seemingly close association with elements of the alt-right. This alliance is clearly visible in the recently released film The New Radical, which stars Taaki along with Cody Wilson— the primary focus of the documentary—as well as featuring Julian Assange. The film is up front about it’s admiration of the alt-right. While discussing the alt-right, Trump, and Taaki’s involvement with Rojava, Wilson tells us:

I’m fascinated by the Alt-Right. I’ve watched the alt-right develop. I think that the alt-right is the only place that exploration and differentiation is even happening. That’s not happening on the left […] And look, I didn’t vote for the guy [(Trump)], but like, you know, take a good thing when it comes your way […] With Trump’s victory, Amir’s mission can succeed as well […] Rojava is allowed to continue to exist.[1]

Wilson is also the founder of the alt-right alternative to Patreon, Hatreon, which Wilson boasts as the “#1 funding platform for the Alt Right”.[2] 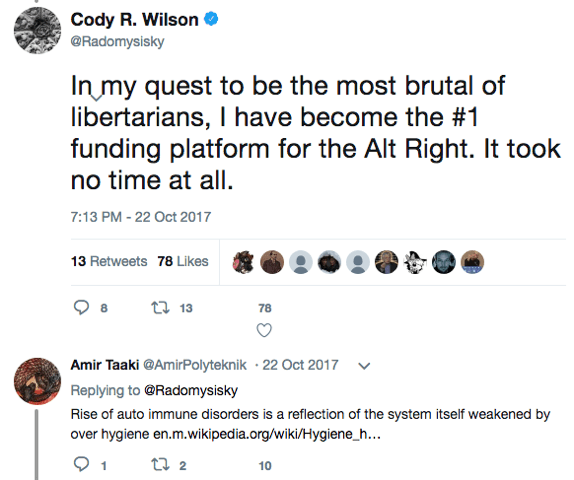 Yet this is not a matter of guilt by association; Taaki has New Right sympathies of his own, including frequently expressing inspiration from the Russian fascist Aleksander Dugin. [3] 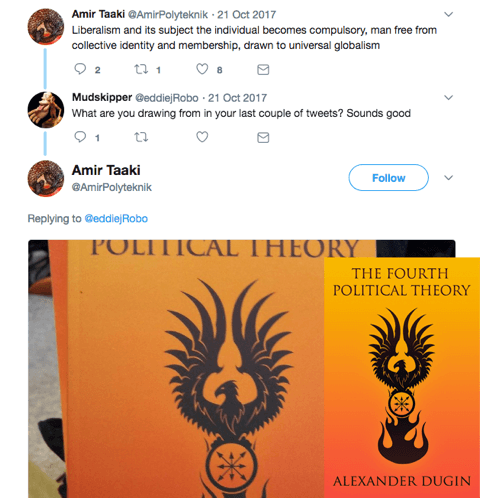 The attached image is a particularly clear example, but Taaki’s Twitter regularly features excerpts from Dugin’s Fourth Political Theory, in addition to statements clearly informed by New Right philosophy. Yet this appears alongside positive references to the work of Murray Bookchin, in one case offering a spectacular misreading which falsely claims that The Ecology of Freedom argues that “multi-culturalism was created to destroy local communities and allow the free flow of capital.” [4] 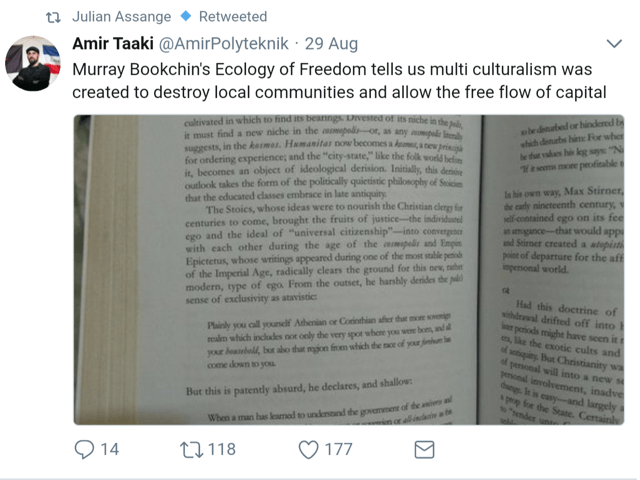 The examples above provide a clear picture that Taaki is not engaging in a critical examination of New Right ideology, but rather openly advocates elements of their philosophy. This underscores the dangers of vaguely “anti-system” positions as well as the need for a theoretically coherent and liberatory politics. Absent clear analysis and vision, we run the risk of conflating emancipatory critiques of liberalism and capitalist modernity, such as Öcalan’s, with the far-right’s anti-liberal revolt against the modern world.

Which brings me to Rojava Plan, an organization/website which appeared online in 2015 that sought to bring volunteers to Rojava and organize support for the revolution there.[5] In the Reddit Rojava community /r/Rojava, the Rojava Plan account run by Amir Taaki was recently removed from the moderator list, along with Taaki’s personal account. This action was taken by the /r/Rojava moderators after right-wing perspectives like those illustrated above were shared in the related /r/Apoism subreddit. Specifically, the Rojava Plan account had made statements regarding multiculturalism which echo the New Right position of ethnopluralism, which uses the language of diversity to argue for racial and cultural separatism. [6]

The aim of this article is not to attack Rojava Plan in its entirety or all individuals who have associated themselves with it. Indeed, locally we have featured speakers at Rojava-related events who have worked with Rojava Plan. But given the information outlined here, there is obviously a strong alt-right tendency within the group which must be challenged. Whether this is ideological naivete or an attempt at right-wing entryism, those who support the emancipatory political vision of Rojava must be clear it has nothing in common with fascist and New Right philosophy.

One Reply to “The New Reactionaries: Amir Taaki, Alt-Right Entryism, and Rojava Solidarity”