Like many of you, I learned of Bruno Latour’s death on October 9th and it brought me great sadness. Somehow, when someone seems larger than life, the end of their life is a terrible surprise. Even intellectual giants are mortal. 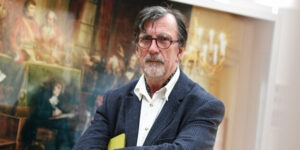 I had the good fortune of being one of Latour’s thésards (doctoral students), working for 2+ years as research fellow at his sociology labo in Paris during the late ‘90s. In addition to weekly doctoral seminars that seemed to go on forever, Bruno invited all nine thésards to lunch each Friday as well as to many dinners in his soaring Hausmannian Paris apartment. These meals also went on forever, as they do in France. And in all of this lovely French slowness, I received a magnificent culinary and intellectual education. Bruno was generous not just with his fine mind; he was also munificent with his students, giving so much of his time and attention, caring deeply about the design, quality, purpose and meaning of our research.

When I entered his research labo at Le Centre de Sociologie de l’Innovation’ (CSI), I’d been studying and teaching social ecology for nearly ten years. I’d been mentored by Murray Bookchin and was a few years into being mentored by the incredibly inventive anthropologist, Arturo Escobar, who was the first theorist to apply a critical post-structural approach to understanding the neocolonial project of ‘development’ in the global South. I was in my early thirties and kind of thought that my thinking cap was pretty full. Bookchin was a politically engaged philosopher and Escobar a politically engaged anthropologist. Two extraordinary thinkers. What else could I possibly need?

I was also aware of the ‘Sokal affair’, an event that pulled Latour into the often-ugly heat of the science wars that assailed upon him fully by the late ‘90s. I’m embarrassed to say that like many others, I’d parroted criticism of Latour without fully understanding the complexity of his work. I originally reached out to him for rather instrumental reasons (though my curiosity was indeed peeked): I needed an institutional affiliation in Paris for my National Science Foundation grant. A strong affiliation was a necessary formality that would provide me institutional legitimacy in a highly hierarchical French world of government, corporations, media, science research facilities and the like. Latour’s CSI was at the time located within L’Ecole des Mines, one of France’s most elite ‘engineering schools’ that provided its students a golden key to the city. Just saying that I was working with Latour at ‘Mines’, allowed me to score interviews with pretty much anyone anywhere. It also provided me with office space (with a computer and 1990s French modem!) and access to an otherwise fortressed system of Parisian libraries.  But just days into my life at CSI, I discovered that I’d found in Latour another great mentor whose sprawling creativity obliged me to reimagine the world anew.

I went into anthropology working with Escobar because I saw ethnographic research as a key complement to social ecology’s primarily philosophical reach and focus. And when I immersed myself in Latour’s work, I found yet another crucial facet of the ethnographic approach. So far, my ‘participant observation’ focused on the realm of people and the ‘cultures’ they inhabit. Now, I would include the realm of ‘things’. Latour’s approach taught me to research the world differently.

Actor-network theory, developed by Both Latour and Michele Callon, provides a way to understand reality as a composite of an infinite set of overlapping networks co-created by both human and non-human actors or ‘actants’. Latour theory of symmetry is a productive one, inviting us to identify and appreciate the symmetrical relationship between non-human and human actors who animate, shape, and inform the life worlds around us. Latour invites us to look for the non-human symmetrical compliment to human entities to whom we often pay too much attention—and to whom we mistakenly give a bit too much credit.

While Latour was rightly respected and celebrated during his long career, his work was often a bit misunderstood due to the science wars. This is true mostly due to those who mistook him for a social constructivist or a post-structuralist – he loathed both terms and saw them as epithets. Latour devised an entirely new way of seeing reality that transcended constructivism, structuralism, and post-structuralism in one fell swoop. He presented the notions of stochasticity and unanticipated effects as dynamic and creative features of reality itself.  And for me, seeing the world as animated by sets of active and productive non-human actors who in turn present the world with sets of unpredictable effects, was nothing short of mind-blowing.

I remember one day during a seminar during my first week or so at CSI, I was really stuck on trying to understand how Latour’s notion of symmetry wasn’t just another form of social constructivism: Wasn’t ‘science’ just a non-human actant ‘constructed’ by people? Upon hearing my words, Latour broke from his generally sweet demeanor and was perturbed, urgent: “You’re entrenched in dualisms, Chaia. I thought your social ecology would not lead you there. Creator and created. Scientist and science. Think bigger, more broadly, with more simultaneity, at the vast networks that are actively, at every moment, creating the world!” As I have the bewildering ability to write quickly when taking notes, I can attest that those are his exact words (on parlait, quand même, en francais). Those words for me, changed everything.

Bruno showed us, for example, that bacteria, farm animals, lab equipment, and even the weather were all nodes in a creative network that merely included Louis Pasteur and other scientists and technicians as they all collaborated to invent the process for pasteurizing milk. One by one, he took down the ‘great men of history’, tossing their lot in with the unpredictable activity of farm animals and farmers engaging in a rich biotic network of life rife with all manner of microorganisms. Without the ever-surprising behaviors of bacteria, there would be no Louis Pasteur.

Otherwise stated, Latour’s actor network theory asks the ethnographer to look at every moment of human action, interaction, invention, or innovation in such a way that recognizes the greater symphony of non-human actors engaged in creating various realities. Each non-human actor, despite its degree of sentience, contributes its own set of unpredictable possibilities as well as biological, physical, and cultural constraints and limitations.

There is an exciting complementarity between Bookchin and Latour’s approach to understanding the nature of nature—and reality itself. Bookchin recognized the dynamic role of spontaneity, creativity, self-directivity, as well as nascent subjectivity and freedom, in constituting the non-human (first nature) life forms that powered natural history, keeping it open-ended. For his part, Latour recognized the role of the non-human actant necessary for keeping life-worlds indeterminate, dynamic, organic, and immune from a (modern/western) human tendency toward deterministic thinking.

Both thinkers fiercely transcended scientific and philosophical reductionism, positivism, as well as mechanistic thinking that deaden otherwise lively ways of theorizing about nature and human nature. While they diverged sharply in their approach to praxis (if Bookchin took to the political, Latour took to the anthropological/sociological), they shared a commitment to lay bare, or represent, the unfolding of phenomena that cannot be reduced to human-driven formulas or blueprints for how phenomena could or should unfold.

I encourage folks to read Latour’s work, if you haven’t already been down Latour road. It’s an important and interesting path that I believe offers a key complement to social ecology–particularly for anthropologists who are ethnographically inclined.

Rest in peace, Bruno. May your work and memory be not only for a blessing: May your ideas live their lives as non-human actants contributing to knowledge production in domains ranging from economics, engineering, and aesthetics to anthropology, science studies—and social ecology.

I know that people will continue to study Latour’s ideas and embroider upon them, hopefully for centuries to come—if and only if we can come together with non-human actants like ecological technologies and democratic political institutions that allow us to keep the centuries rolling forward.