David Noble, a pioneering historian and critic of technology and of corporate dominance over academic institutions, passed away suddenly this past week. David lectured a couple of times at the ISE, spent summers in Barnet, just around the bend from Grace Gershuny’s house, and remained a good friend of several of ours.  Very sad news… 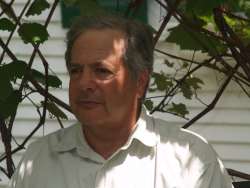 Arguably the greatest critical historian of science and technology died on Monday December 27, 2010, suddenly and unexpectedly of natural causes and within a few days of being admitted to hospital.

His family was by his side. David Noble is survived by his wife, three daughters, two brothers and his sister.

David’s seminal books include America by Design, Forces of Production, A World Without Women and The Religion of Technology.

In Forces of Production he established that corporations are obsessed with control over the workforce, even at the expense of profit, thereby dissolving the popular economics myth of the free hand of the market.
He wrote Digital Diploma Mills and toured campuses to single-handedly stop the North American plan to web-commodify university courses via institutional course-copyright predation.

His last book Beyond the Promised Land was meant to accompany the new anti-globalization movement, much like Marcuse theorized [in] the 1960s but Noble avoided the academic cover. He argued in plain terms that the history of resistance was not repeating itself and that the new movement was defined by anarchism, without a need for the promised destinies of religion or econo-political systems such as capitalism and socialism. The book contains the most vibrant description of the 1968 events I have ever read and an unparalleled account of the contributions of the anarchists that led to today’s First World radicalism.

David Noble has been the single most powerful force in Canada resisting the corporatization of universities, including the erosion of collegial governance and disregard for academic freedom. He was tireless in this project. In a 2008 precedent-setting labor arbitration award, David Noble was the first professor in Canada to be paid cash reparation ($2,500) for a violation to his academic freedom, when York University put out a press release critical of his “tail that wags the dog” pamphlet exposing Israel Lobby influence at the university.
David Noble was the Canadian Israel Lobby’s worst nightmare. He and others won the battle in terms of public opinion but now we must determine if public opinion will be able to constrain the workings of backroom power politics as Canada continues to distinguish itself as Israel’s strongest uncritical supporter and enthusiastically participates in Israel’s international image branding project.

David was fired from MIT because he was “too radical” for the school, according to Noam Chomsky. For a year or more he was the curator of a major collection about technology at the Smithsonian Institution but was fired before the critical collection was made public and the collection was canned. York University in Toronto (Canada’s third largest university) hired him with tenure on the basis of the stature of his work. He was planning to retire from York University this summer.

In more than thirty years of teaching university classes David Noble never graded his students. They learned because learning is natural and he did not want to interfere with that. He did not want to collaborate with the forces of production.

David and I were best buddies.

I first saw David Noble in 2004 when he participated with Ralph Nader and Leonard Minsky in the keynote event of an annual conference organized by the graduate student union at the University of Ottawa where I was a tenured physics professor. It was a major event and the university president presented Nader. After Nader explained the problem of corporatization, Minsky appealed to students to stand and fight, and  then David simply shredded the president and the university executives like I had never seen before. It was powerful and inspiring.

It catalyzed my anti-corruption intra-institutional activism that eventually got me fired. The university administration cut its funding to the conference for the following years.

Later, when David returned to my campus to speak in 2006 I gave him a draft copy of my 2007 critical essay aboutglobal warming. He took it home and then called me and we became instant friends. He used the essay in his classes every year and invited me to join. But more importantly, we became co-combatants against institutional corruption, education insanity, and illegitimate power.

David was very isolated by our colleagues’ refusal to take on the institution and their false rationalizations that zero-risk posturing was effective  activism. He would say to me “there are only two of us but we have them surrounded.” We used our voices, the courts, access to information requests, and our academic freedoms, in an all-out attempt to out collaborators and to awaken our dead colleagues.

“One knows … that the university and in a general way, all teaching systems, which appear simply to disseminate knowledge, are made to maintain a certain social class in power; and to exclude the instruments of power of another social class. … It seems to me that the real political task in a society such as ours is to criticise the workings of institutions, which appear to be both neutral and independent; to criticise and attack them in such a manner that the political violence which has always exercised itself obscurely through them will be unmasked, so that one can fight against them.”

In the present suffocating climate of progressive “service” to the underprivileged and “ablest language” self-censorship, David felt like he lived on another planet while immersed in First World managerial madness. But he lived every moment. David lived!

From the free-style guitar that he played, to the meals he made for guests, to gardening and roughing it at the cabin, to his explanations about  man’s inadequacy before woman’s capacity to make life, to his ever deepening explorations in social analysis, to his accompaniment of friends and students on picket lines and at court hearings, to his unparalleled ability to expose power, to his pleasure in disrupting protocol and convention, to his love for freedom, to his creative refusal to comply… David lived!

I never had a fight with David. But I wish he were here now so I could thoroughly bawl him out for dying! The First World has lost one of its rare beacons of truth.

Denis G. Rancourt is a former tenured and full professor of physics at the University of Ottawa in Canada. He practiced several areas of science which were funded by a national agency and ran an internationally recognized laboratory. He has published over 100 articles in leading scientific journals and several social commentary essays. He developed popular activism courses and was an outspoken critic of the university administration and a defender of student and Palestinian rights. He was fired for his dissidence in 2009. His dismissal case is expected to go to court in the next year or so.

2 Replies to “A Tribute to David Noble”