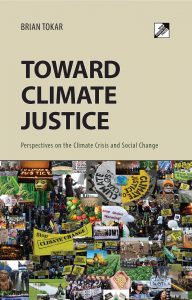 The Institute’s Climate Justice Project, based in central Vermont, brings the critical and reconstructive outlook of social ecology and our years of experience with organizing and direct action, into local, regional and national campaigns to address the global climate crisis. Our focus is on dissecting root causes and advancing democratic, community-centered alternatives.

A central goal in recent years is to support the continued evolution and increased unity of grassroots campaigns in Vermont and throughout our region to address the underlying causes of global climate disruptions. Even though many people appreciate the severity of the emerging climate crisis and politicians generally acknowledge the problem, fossil fuel interests continue to push to expand operations and infrastructure while undermining sensible measures to reduce energy use. Frontline communities throughout our region are standing up to industry plans to build more pipelines and transport oil over train lines. New alliances are emerging with a resurgent student movement, progressive elements of organized labor, and rising grassroots movements for racial justice.

The project’s main accomplishments since its founding in 2007, include: