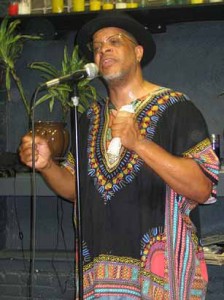 Here’s the info for this event which is scheduled to include ISE Associate Ashanti Alston:

In this opening panel the panelists will speak about their various experiences with and analysis of the police, prisons and alternatives to both.

is a former member of the Black Panther Party and ex-political prisoner. He publishes the Zine Anarchist Panther and has been a guest lecturer at the Institute for Social Ecology in Vermont, speaking on the Panthers and the history of Black nationalist movements. He has spent time in Chiapas, Mexico, studying the autonomous structure of Zapatista communities and working on his memoirs. Ashanti resides in Rhode Island, where he is presently the national co-chair of the Jericho Amnesty Movement, and an active member of Estacion Libre, the Malcolm X Grassroots Movement, and Critical Resistance.

is a member of the Kitigan Zibi First Nation in Quebec. Her mother was struck and killed by the Quebec Police on October 6th, 2001.She believes that there was homicidal negligence on the part of Surete du Quebec officers and is presently working on a complete review of the investigation, arguing that homicide files were filled with inaccuries and incongruent reports and that police procedures were not conducted according to accepted practices.Bridget feels the dignity and respect of the deceased and family members was greatly breached by all police officers and the investigation team involved.

is the daughter of Ben Matson who was killed by Vancouver police in 2002. She is an activist who opposes police violence and impunity. She says investigations into police killings and brutality should be conducted by a third party not connected to any police force. She says the way police there handled the investigation into her father’s death is typical of what happens across the country.

is a long-time organizer and activist. He has been involved in many groups and campaigns over the years, especially the anti-capitalist movement (CLAC), anti-racism and migrant-justice (with No One Is Illegal – Montreal), indigenous solidarity and anti-police brutality. He was also targeted for arrest during the recent anti-g8/g20 protests in Toronto.

In recent months much has been said and written in Ottawa and Ontario about the relationships our communities have with police. We were all shocked by the videos of police brutality that have recently surfaced in the case of Stacey Bonds, as well as the accounts of the attack by an off duty police officer on a taxi driver at the Ottawa airport. We were stunned by the unprecedented police repression and arrests surrounding the anti-G20 mobilizations in June. We were saddened to hear of the shooting death of a native man out west by a police officer.

Many among us are starting to understand that these are not just a few bad apples, this is systematic. More than the high profile cases that we see on the news, it is the institutionalized discrimination and day to day operations of the police that worry us the most; The continued arrests, criminalization and harassment of sex workers, queers, panhandlers, communities of colour and indigenous people. We are disgusted by the impunity with which police seem to operate and many are feeling very alarmed by the role that police have taken on in our communities.
As a reaction to this OPIRG-GRIPO is organizing a forum on police violence, the role of prisons and incarceration and alternatives to current forms of policing. This forum will take place March 18th and 19th, 2011.
Following in the footsteps of other organizations doing amazing work against police brutality, we aim for this forum to create a launching pad for dynamic local work to happen against police violence and incarceration.

CALL FOR VOLUNTEERS
If you would like to help us organize this forum, please get in touch with us at opirgrc@gmail.com