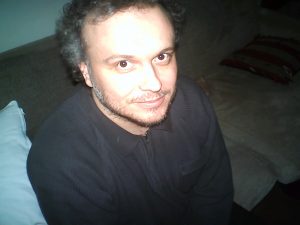 [Editor’s note: We are very grateful to Rafa for his contribution to the Social Ecologist Profile series, especially considering English is not his first language.]

Please introduce yourself (What kind of work you do, Where you live, etc.)

I live in Belgium, that’s where I have lived almost all of my life. I have been mostly active here in the northern city of Antwerp, but certainly also a bit in large cities like Ghent and Brussels. And I like to be politically active when I’m travelling too.

I originally come out of the Anarchist movement and became really interested in things like eco-anarchism and social ecology more than 15 years ago.

I had much time to study and be active in radical groups, because I never did much paid work and State support for unemployed people could be worse here in Belgium.

I first read about Social Ecology in the mid-nineties, in Anarchist Journals from the Low Countries. There was a Belgian philosopher called Roger Jacobs who wrote much about the work of Murray Bookchin, Roger J. also regularly wrote for these left-libertarian periodicals.

I got to meet Jacobs and started to know him a bit better, although he lived far away, in a Belgian region I never visited.

There were some action camps at that time in Belgium with much eco-anarchist inspiration. Just after visiting such a camp for the first time, I bought my first book of a Social Ecologist, it was called Toward an ecological society and written by Murray Bookchin.

At that time I did not know of any other Social Ecologists, much seemed to revolve around the work of Murray.

For defining social ecology, I think that the most known attempt to define it hasn’t been bad (considering that it is actually a whole new field of thinking and thus not that easy to define):

This has been an influential definition so why not refer to it? But maybe I would rather say:

1: a coherent radical critique of current social, statecraft and anti-ecological trends. 2: a political, ecological and ethical approach to society. 3: a striving for communal and direct democracy.

I think that this second way of defining it is closer to defining what I would call social ecology in a strict sense. I often start with saying that it is much about making it clear that social and ecological problems are much connected with each other.

When I discovered a bit what social ecology was about, almost 17 years ago, I was much interested in anarcho-pacifism, and also in libertarian Marxism or other radical Left stuff. I quite enjoyed a concept at that time called Anarchist federalism (decentralizing the decision-making in a society and forming anti-authoritarian communes working together in a federation).

Five years before all of that happened I already had some young radical friends, I was 18 years old myself then and studied political and social sciences in Brussels.

Anyway, the radical thinking of Bakunin, Marx and others was not something completely new for me when I was in my late teens.

But it was Social Ecology and some for a long time in Latin America active writers like pedagogues Paolo Freire and Ivan Illich (he also was a radical ecologist), or the humanist psychoanalyst Erich Fromm that later really got me interested in the ideas of the radical Left.

I became more and more politically conscious and I managed to feel less bad about my academic failures while studying. Oh yes, I had really started to hate all of that schooling going on in Belgium and all that academic stuff really wasn’t my cup of tea, but it was difficult to do without those schools if I wanted to study and get subsidized by the State for it.

How does social ecology and/or your experience with the Institute for Social Ecology influence your current work?

The Belgian State still isn’t keen on the acts of civil disobedience I sometimes have fantasies about, but during the last six years it did show an interest in making me study Social work and subsidizing it.

I’m probably on my way now to being a social cultural worker with a good diploma, but I’m already 40 years old so unfortunately having it would not help me that much to find a paid job I like doing.

Recently I have been much occupied with writing a thesis, it’s mostly about climate change and ecological social work, I usually like writing texts or comments about politics and statecraft.

For that I often use the internet, but I more often appreciate having a face to face communication with people for it, so I regularly do that together with close friends and others.

In all of the things I do Social Ecology plays an important role. In lectures, writing, discussing with people in study groups (unfortunately, these are group activities less about politics and dialectical thinking than I want them to be), informing people around me, everyday life,…

What do you see as the greatest opportunities and greatest challenges for achieving a sustainable relationship between humanity and the wider world?

The greatest opportunities?  Well, I think that the current movement against climate change and the role Social Ecologists play in it offers some interesting prospects for example, or the activities of people from the libertarian left who want to be active with media in a good way, interesting philosophers or social theorists, creative artists much into solidarity with the oppressed,…

A big challenge is finding solutions for the social and ecological problems we face, the ecological crisis and every other modern crisis. If the oppressed in the world find solutions for all of that we will have the sustainable relationship you refer to here.
Any great stories about being around the ISE?

I haven’t been much around the ISE but I learned much from the discussion forum it used to have a long time ago (it was called the ise-l, does anybody know if there are parts of these online discussions still available somewhere?).

The greatest experience is to be around many people knowing much about social ecology, that can really be special and quite trigger some new kind of thinking.