More information, online orders, and inside search are available here. 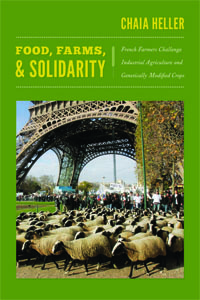 The Confédération Paysanne, one of France’s largest farmers’ unions, has successfully fought against genetically modified organisms (GMOs), but unlike other allied movements, theirs has been led by producers rather than consumers. In Food, Farms, and Solidarity, Chaia Heller analyzes the group’s complex strategies and campaigns, including a call for a Europe-wide ban on GM crops and hormone-treated beef, and a protest staged at a McDonald’s. Her study of the Confédération Paysanne shows the challenges small farms face in a postindustrial agricultural world. Heller also reveals how the language the union uses to argue against GMOs encompasses more than the risks they pose; emphasizing solidarity has allowed farmers to focus on food as a cultural practice and align themselves with other workers. Heller’s examination of the Confédération Paysanne’s commitment to a vision of alter-globalization, the idea of substantive alternatives to neoliberal globalization, demonstrates how ecological and social justice can be restored in the world.

1. Introduction: Creating a New Rationality of Agriculture in a Postindustrial World  1

Part I. Toward a New Rationality of Agriculture  2. The New Paysan Movements: French Industrialized Agriculture and the Rise of the Postindustrial Paysan  393. The Confédération Paysanne: Philosophy, Structure, and Constituency  69

One Reply to “Just out!: Chaia Heller’s “Food, Farms, and Solidarity””