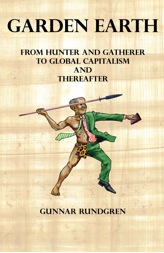 Garden Earth: From Hunter and Gatherer
to Global Capitalism and Thereafter
by Gunnar Rundgren

Gunnar Rundgren is well known in the international organic community as an articulate leader, consultant, theorist, and practitioner of organic agriculture world wide.  A founder of the influential Swedish organic certification program KRAV, he later became President of the International Federation of Organic Agriculture Movements (IFOAM), helping transform it from a highly Euro-centric organization to one with strong representation from every continent.  His consulting organization, Grolink, helps train organic farmers in Africa and has advised several UN agricultural programs.  Grolink also publishes an electronic newsletter called The Organic Standard, for which I have served as a correspondent for several years.  Having high expectations of his ambitious and far-reaching book, recently translated from Swedish into English, I was not disappointed.

This book is of interest to social ecologists for its political and philosophical stance that offers unapologetic anti-capitalist insights and well founded information about the evolution and current status of global food production and distribution systems.  Though he is clearly not a ‘true believer’ of any particular faction, he refers to Bookchin and other left libertarian thinkers as well as deconstructing some of the more pernicious ‘free market’ theorists. The book’s subject is very broad in scope, but brings the reader through a carefully reasoned and accessible discourse that outlines a clear path towards wider adoption of organic practices.  The creation of a sustainable food system requires a cultural shift toward organic values, and away from the domination of the market system.

The book is divided into four parts, beginning with “The Great Narrative” which traces the evolution of modern society from the long period of human life as hunters and gatherers, and includes a discourse on “How Technology and Energy Shape Our World.”  Part II addresses ecological challenges such as global warming, water and land degradation, and chemical pollution, and includes several chapters that discuss different aspects of agriculture and food production.  The concluding chapter in this section offers a lucid philosophical discussion on the relationship between humans and nature.  In asserting that “Human beings are part of nature, have always been and will always be,” Rundgren places himself firmly in opposition to the belief, prevalent within the organic community, that human creations are inherently at odds with the natural world.  Rather, he argues, the history of human exploitation of nature is more appropriately seen as “a history of a few people exploiting many other people.”

Part III deals with “Our Society,” with a focus on economics and development issues, and an emphasis on how resources are distributed and the social forces that define how we divide our lives between work and leisure pursuits.  The concluding chapter in this part calls into question “The Legitimacy of Capitalism” and the supremacy of the market economy, which turns all aspects of life into commodities to be bought and sold, and turns citizens into consumers.  Asking the question, “Can capitalism be combined with sustainable development?” Rundgren outlines the logic of the commodification of nature thus:  “Capitalism is dependent on a thriving society and on the exploitation of nature’s resources for its existence.  At the same time, capitalism undermines both those fundamentals of its own existence.  This is the real crisis of capitalism.”  The hope, perhaps paradoxically, lies in human nature, and the observation that most social interactions do not involve profit seeking.  “It is humanity as such that makes the world a decent place to live in, despite capitalism and not thanks to capitalism.”

Part IV gives the author’s prognosis of “What Lies Ahead of Us?”  Now that capitalism has “passed its best-before date,” what kind of society can emerge to prevent the impending ecological and social crash predicted by a wide range of critics and theorists.  This is clearly an unknown realm, which defies confident prediction.  Nevertheless, as Rundgren emphasizes, “even if we can’t be sure or we know that we will never know for sure, it is our obligation to do our best to ensure that future generations will have a decent life.”  The conclusion offers “Garden Earth,” envisioned as a reconstructive alternative to corporate capitalist ideology.  What this entails, among other things, is “expanding liberty and the notion of liberty to include also the capabilities of the individual and to resolve the false contradiction between the freedom of the individual and that of society.”

While this book represents serious and well researched scholarship, abundant with factual data from authoritative sources, it is written in a very accessible style with a sense of personal warmth and lighthearted humor that keeps one’s interest without excessive jargon.  It succeeds in painting a picture of the role of organic production systems in counteracting the environmental crisis created by the failed ‘free market’ system, without lapsing into overly abstract rhetoric.  Like its author, it is both philosophically deep and grounded firmly in earth bound reality.  Reading it, to be sure, affirms my own understanding of this big picture.  Social ecologists might debate some of his explicit and implicit positions, a debate that  is encouraged by the author.  This work gives us an excellent tool for understanding agriculture and food systems through a social ecology compatible lens, and a valuable contribution to the discussion of how to bring about a society that is rational, prosperous, equitable and ecologically based.

Garden Earth is available in both hard copy and e-book editions.  For more information: http://gardenearth.info/en/

Grace Gershuny is internationally known in the alternative agriculture movement, having worked for over forty years as an organizer, educator, author and consultant, as well as a small-scale market gardener. She has written extensively about soil management and composting, including The Soul of Soil and Start With the Soil, and was the editor of Organic Farmer: The Digest of Sustainable Agriculture for its four year existence. Grace has been involved with organic certification for many years, including five years on the staff of USDA's National Organic Program. Her latest book, Organic Revolutionary: A Memoir of the Movement for Real Food, Planetary Healing, & Human Liberation, will be available soon. She has taught at the ISE since 1986, and grows her own vegetables and chickens in Barnet, VT.
View all posts by Grace Gershuny →