Two issues of the print journal, Communalism, were published in Norway in 2009-2010 by the collective that now produces the New Compass webzine. This was the Spring/Summer 2010 issue. 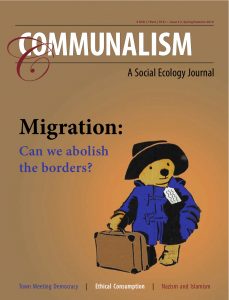 Consumed by ethics, by Mat Little
Can we buy ourselves a new society?, by Brian Tokar
Progressive nationalism, by Ken Furan
Strangers into citizens: Interview with Julie Camacho
Migration without borders, by Teresa Hayter
The legacy of Enlightenment, by Atle Hesmyr
National Socialism and Islamism, by Matthias Küntzel
Town meeting advocacy, by Ben Grosscup
Change the world by taking power, by Sveinung Legard