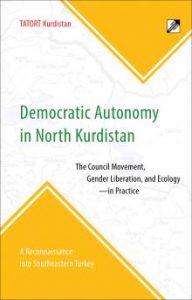 New from New Compass Press:  In the fall of 2011, a group of German activists journeyed into the Kurdish regions of Turkey to learn how the theory of Democratic Autonomy was being put into practice.  They discovered a remarkable experiment in face-to-face democracy—all the more notable for being carried out in wartime.

Long-time ISE associate and past faculty member Janet Biehl has translated the German group’s chronicle of their travels and interviews.  In Janet’s Translator’s Note, she writes:

As many as twenty million Kurds live in Turkey, concentrated in the southeast, in what radical Kurds call North Kurdistan. Under a constitution that asserts the nonexistence of ethnic minorities, Turkey has for decades tried to pacify the Kurds through assimilation and, when that failed, brutalize them into submission. Since 1984 the government has been at war with the PKK, the guerrilla organization waging the military fight for Kurdish freedom—which once upon a time meant the creation of a Kurdish state separate from Turkey.

… The Kurdish freedom movement no longer advocates a separate Kurdish state; and the new aspiration that has replaced that discarded one are the subject of this book. Since 2005, the Kurdish movement has advocated Democratic Autonomy, the creation of local democracy, in alternative institutions, as promulgated by the imprisoned Kurdish leader Abdullah Öcalan, who was influenced by the writings on assembly democracy and ecology by the American communalist Murray Bookchin. Democratic Autonomy distills wisdom hard earned by generations of leftists.

To break the prevailing media silence, to publicize the state’s repression of the Kurdish freedom movement, and to promote Democratic Autonomy, peace and human rights advocates in Germany banded together to form TATORT Kurdistan. (The name means “Crime Scene Kurdistan.”) TATORT has campaigned against the German government’s weapons sales to Turkey and its military operations there; against the demonization of the Kurdish movement, against Turkish war crimes, and against dam projects, and much more.

In the fall of 2011, a group of TATORT activists journeyed into the Kurdish areas to discover how the theory of Democratic Autonomy was being put into practice. Their interviewees discovered a remarkable experiment in face-to-face democracy—all the more notable for being carried out in wartime. They described what they had found in Demokratische Autonomie in Nordkurdistan, published in late 2012 by Mesopotamien Verlag. The book’s unpretentious style masks the boldness of its vision and the richness of its description of a rare endeavor in human history: a conscious effort to implement a socialist utopia. It sets a standard for socialist theory and practice in the twenty-first century.

From the Foreword by TATORT Kurdistan:

We set out with only a vague idea of how one might go about building a democratic, ecological, and gender-liberated society, let alone in the Turkish part of Kurdistan. What institutions and projects had already been constructed or were under way? What were their main points of emphasis?  What difficulties were they experiencing? What were their long-term prospects?  These were some of our questions.

During our journey, which lasted ten days, we visited the cities of Amed, Êlih, Dêrsim, Colêmerg, Gewer, and Wan. We had planned our itinerary in advance, but once we were there, we had to stay flexible due to the complications of wartime. All our interviewees were laboring under huge workload and enduring continued repression; some had previously spent time in prison, as part of a wave of arrests that began in 2009. Nonetheless they found time to talk to us.

… To us as outsiders, the places we visited seemed quite energized. A civil society counterpower is palpably in place. We hope that these institutions will be able to withstand the Turkish government’s harsh repression. They represent an important beginning, even if they have not yet achieved an autonomous existence outside the state and the prevalent economic institutions. But given that Democratic Autonomy has been under construction for only a brief time, and only under conditions of political repression, its practitioners could hardly achieved much more.

One Reply to “New Book: Democratic Autonomy in North Kurdistan”