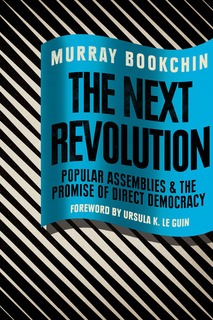 The Next Revolution: Popular Assemblies and the Promise of Direct Democracy

by Murray Bookchin
Edited by Debbie Bookchin and Blair Taylor
Preface by Ursula K. Le Guin
From Athens to New York, recent mass movements around the world have challenged austerity and authoritarianism with expressions of real democracy. For more than forty years, Murray Bookchin developed these democratic aspirations into a new left politics based on popular assemblies, influencing a wide range of political thinkers and social movements.
With a foreword by the best-selling author of The Dispossessed, Ursula K. Le Guin, The Next Revolution brings together Bookchin’s essays on freedom and direct democracy for the first time, offering a bold political vision that can move us from protest to social transformation. A pioneering voice in the ecology and anarchist movements, he is the author of The Ecology of Freedom and Post-Scarcity Anarchism among many other books.
You can see Debbie Bookchin and Blair Taylor presenting on The Next Revolution at Red Emma’s Bookstore Coffeehouse in Baltimore here.
The book contains several of Bookchin’s key essays from the 1990s and early 2000s that have not been published in book form, plus “The Future of the Left,” which was not previously available.
Contents
Foreword by Ursula Le Guin
Introduction by Debbie Bookchin and Blair Taylor
1. The Communalist Project
2. The Ecological Crisis and the Need to Remake Society
3. A Politics for the Twenty-First Century
4. The Meaning of Confederalism
5. Libertarian Municipalism: A Politics of Direct Democracy
6. Cities: The Unfolding of Reason in History
7. Nationalism and the “National Question”
8. Anarchism and Power in the Spanish Revolution
9. The Future of the Left