By ISE on November 19, 2015 in Article Archive, Social Ecology Blog

To celebrate the publication of the brand new edition of Frances Moore Lappé and Joseph Collins’ classic book, World Hunger: 10 Myths, we offer a new article by our Puerto Rico-based colleague, Carmelo Ruiz: 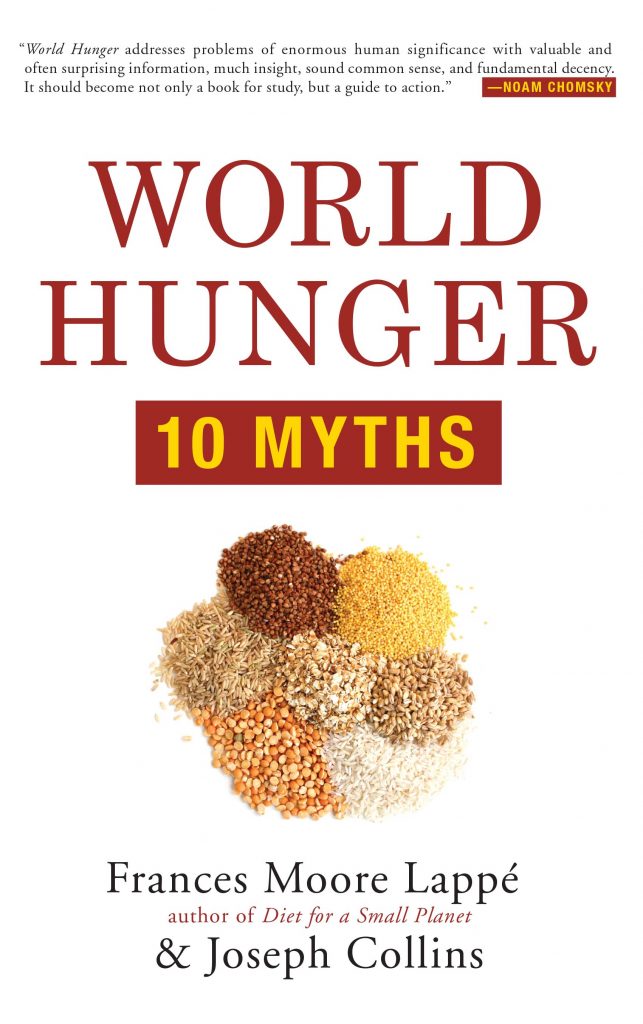 That food is becoming scarce because demand and population growth are outstripping supply is an article of faith that is rarely ever examined let alone questioned in mainstream environmental policy circles, or in major news media. The latest incarnation of this unquestioned conventional wisdom comes from commentators and popular science writers who have recently soared to literary fame with their public speaking, books and flashy media presentations.

One of these is journalist Joel Bourne, senior editor of National Geographic magazine and author of The End of Plenty. “With skyrocketing population and tightening grain supplies spurring riots, revolutions, and immigration around the globe, experts now say we must grow as much food in the next four decades as we have since the beginning of civilization to avoid a Malthusian catastrophe”, says Bourne on his web site.

In a June 2015 interview with US National Public Radio, Bourne said:

“…the world began consuming fairly consistently more of these major grains than it was producing, whittling down stockpiles to levels we haven’t seen since the 1970s. So, for example, in the 1970s, we consumed or utilized more grain than we ate only about four years out of the decade. In the drier ’80s, it was about five years. Since 2000, we’ve consumed or utilized more of these feed grains in eight of the first 12 years of the decade. So really, we’re starting to see the demand pressures outstrip our ability to produce food… researchers say that now we’re going to have to, because of the increased demand from population growth, increased meat consumption in developing parts of the world, that we’re going to have to double our grain production, our food production, by 2050 to make sure everyone’s reasonably fed.”

But, do the data actually support the assertion that food production needs to increase in order to meet demand? The answer is no, according to Food First, a US non-profit organization that has been researching food and development issues for 40 years:

“The world today produces enough grain alone to provide every human being on the planet with 3,500 calories a day. Increases in food production during the past 35 years have outstripped the world’s unprecedented population growth by about 16 percent. According to the Food and Agriculture Organization (FAO) of the United Nations, gains in food production since 1950 have kept ahead of population growth in every region except Africa. The American Association for the Advancement of Science (AAAS) found in a 1997 study that 78 percent of all malnourished children under five in the developing world live in countries with food surpluses.

“Among studies published between 1990 and 1994, most estimates fall in the 10 to 14 billion range. By contrast the 1996 United Nations forecast, generally considered to be the best future population projection, predicts that the world population will peak at 9.36 billion in the year 2050, and stabilize thereafter.”

Will increasing food production help alleviate hunger in the poor countries of the global South? The World Bank itself admitted in a 1986 study of world hunger that an increase in food production would not necessarily lead to food security. According to an article in ​Business Week ​magazine, “even though Indian granaries are overflowing now,” thanks to rising wheat and rice yields, “5,000 children die each day of malnutrition”. Since the poor can’t afford to buy food, “the government is left trying to store millions of tons of foods. Some is rotting, and there is concern that rotten grain will find its way to public markets.”

If increasing food production were the solution to hunger, then Americans should be the best fed people in the world. But in spite of its huge food production, hunger is a reality in the USA. According to Food First:

“In the 1990s over 30 million Americans cannot afford a healthy diet, and 8.5% of U.S. children are hungry and 20.1% more are at risk of hunger. But who would argue that not enough food is produced? Surely not U.S. farmers; overproduction is their most persistent headache. Nor the U.S. government, which maintains huge storehouses of cheese, milk and butter. In 1995, U.S. aid shipments abroad of surplus food included more than 3 million metric tons of cereals and cereal products, about two thirds consisting of wheat and flour. That’s enough flour to bake about 600 loaves of bread per year for every hungry child in the U.S.”

These data may be dated, but after the recent years of economic crisis in the USA, the food insecurity situation in the country can only be worse now.

Bourne states that “High prices are the ultimate signal that demand is outstripping supply, that there is simply not enough food to go around.” But the real world relationship between supply and price is never that simple. Bourne ignores the influence of speculation on the price of food.

“Following heavy lobbying by banks, hedge funds and free market politicians in the U.S. and Britain, the regulations on commodity markets were steadily abolished. Contracts to buy and sell foods were turned into ‘derivatives’ that could be bought and sold among traders who had nothing to do with agriculture,” says John Vidal, environment editor of the British daily the Guardian. “In effect a new, unreal market in ‘food speculation’ was born. Cocoa, fruit juices, sugar, staples, meat and coffee are all now global commodities, along with oil, gold and metals. Then in 2006 came the U.S. subprime disaster, and banks and traders stampeded to move billions of dollars in pension funds and equities into safe commodities, and especially foods.”

According to Olivier de Schutter, United Nations Special Rapporteur on the right to food:

“there is a reason to believe that a significant role was played by the entry into markets for derivatives based on food commodities of large, powerful institutional investors such as hedge funds, pension funds and investment banks, all of which are generally unconcerned with agricultural market fundamentals. Such entry was made possible because of deregulation in important commodity derivatives markets beginning in 2000. These factors have yet to be comprehensively addressed and, to that extent, are still capable of fuelling price rises beyond those levels, which would be justified by movements in supply-and-demand fundamentals. … The logic has become purely speculative, in which investors adopt a herding behavior (they follow what other investors do), and do not make decisions anymore based on the ‘fundamentals’ of supply and demand. The result is more volatility, bubbles that form and bubbles that explode. This hurts in particular small producers and the poor food-importing countries”.

But, where then does the idea that we must increase world food production by 70% or even double it by 2050 come from? Food First executive director Eric Holt-Gimenez decided to find out:

“According to research by Isobel Tomlinson, this factoid has two primary sources; one is an Earthscan book published in 2003, the other is a 2006 interim report from the FAO. Based on general economic equilibrium modeling exercises, the authors took economic growth assumptions together with population growth to determine projected food production. The two scenarios described a 50 percent increase by 2030 and a 100 percent increase by 2050, respectively. (This huge discrepancy between estimates amounts to more than all the food production of the North American continent.)

“The FAO models were re-run in 2009 by the United Kingdom House of Commons Environment, Food and Rural Affairs Committee who then derived the now popular, 70 percent by 2050 scenario. The scenarios are based on prices, not yields; do not include fruits and vegetables and do not consider unequal distribution. But the biggest caveat is that these were not prescriptions but scenarios of a likely future. The original reports never argued that we needed to increase food production by 50, 70 or 100 percent by 2050. This is simply what the models predicted would happen.” (emphasis added)

“This clearly raises questions about why these statistics have risen to such prominence. Drawing on framing and discourse as conceptual tools… these statistics are a key discursive device used by dominant institutions and individuals with prior ideological commitments to a particular framing of the food security issue …the need to ‘double’ production is clearly a powerful statistic that has captured the imagination of policy-makers, politicians, scientists and industry alike. Its use has enabled an air of scientific precision and certainty to be given to a specific line of a somewhat neo-Malthusian reasoning.”

The questionable assumptions and economic interests behind this neo-Malthusian reasoning, as Tomlinson calls it, merit thorough study. For the most part, it has served to conceal the political and economic factors that cause hunger and to deflect attention away from policy alternatives like land reform and food sovereignty.

Carmelo Ruiz is a Puerto Rican author, journalist and graduate of Goddard College’s Social Ecology MA program. He is a senior fellow of the Environmental Leadership Program and a research associate of the Institute for Social Ecology. Ruiz is also director of the Latin America Energy and Environment Monitor and runs a blog on journalism and current affairs. His Twitter ID is @carmeloruiz.

View all posts by ISE →

Is the Paris climate conference designed to fail?
Article: How to be an anti-capitalist today