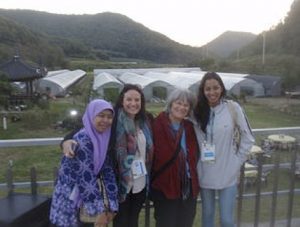 Last October I had the opportunity to deliver a talk at a conference in Goesan province, South Korea. The Regional Conference on Marketing & Innovation in Organic Farming was co-sponsored by IFOAM (International Federation of Organic Agriculture Movements) with the Goesan provincial government. My presentation, co-authored by former IFOAM President Katherine DiMatteo, was entitled, “The organic revolution, or you can’t dismantle capitalism with a marketing plan” (full text was posted in September, but the link unfortunately may not work in all browsers).

The whole event was inspiring on many levels. The conference was part of a month-long organic expo that included an extensive trade show featuring organic products from throughout Asia and the Pacific region, along with several educational exhibits, extensive demonstration plots of organic rice and other grains, cultural events, and an all-organic food hall. The conference itself featured presentations on organic marketing and economic development work being done all over the world, representing collaborations between smallholder farmers, academic institutions, and government agencies, as well as consumer groups. As I prepared my talk, I was truly humbled to realize that I was the only North American represented on the agenda. Only a handful of other presenters came from Europe or other parts of the Global North.

I began my presentation by apologizing for my country and its neo-colonial domination of world trade, especially devastating to food sovereignty in most of the countries represented. Then I held up a copy of the latest Time Magazine, which I picked up in the airport en route to South Korea, saying:

“You may have heard of my Senator, Bernie Sanders, who is running for President of the US. Here he is on the cover of Time (pause for applause). Bernie spoke at the last organic farming conference held in my state, as he does every year, and paid us the compliment of calling us revolutionaries. It’s a title that I’m proud to wear.”

The rest of my talk included comments about the growth of the organic industry in the US, now almost 5% of retail food sales (around $39 billion in 2014). Despite this success, organic acreage is still significantly less than 1% of US farmland, and there is a troubling shortage of crucial organic ingredients like corn and soy, much of which is now imported from Latin America and Asia. If we want to convert more land more quickly to organic production—increasingly urgent as we learn how helpful this would be in mitigating greenhouse gas emissions—we have to push for a more radical transformation of our economic system, and reject such toxic trade deals as the TPP. We must also reject the mentality that anoints the consumer as the most important arbiter of organic production standards, and reject the demand for ever ‘higher’ organic standards in the name of purity.

In closing, I noted that we need a revolution that is both organic and political. In my viewpoint this revolution will not be led by the US, or any other country of the Global North, for that matter.  “To conclude, I offered, “it is really up to leaders in the Global South, you brilliant organic activists, researchers, organizers, and farmers. You must lead the fight for the right of all people to healthy food and access to food producing resources, locally organized as appropriate to your own communities, and democratically managed.” 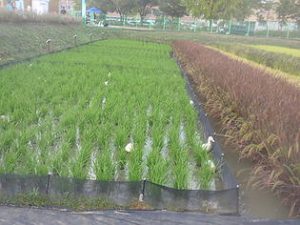 One of the highlights of this trip was a visit to a nearby Hansalim Cooperative facility, a joint producer-consumer federation which, among other projects, owns a grain mill that contracts with the grower members to produce staple grains according to the needs of the consumer community. The new friends I made—people from Argentina, Australia, Bangladesh, Ghana, Indonesia, India, the Philippines, South Africa, and of course South Korea—and the stories they shared of their work, continue to inspire me and give me hope as we enter this election year.