The following essay is an excerpt from America’s Addiction to Automobiles, by Chad Frederick. The book argues that contrary to the ethos of much contemporary urban planning, simply increasing the multimodal infrastructure of our cities is not enough to free them from automobile dependency. This task requires that we change the underlying logic of city governance, away from the growth paradigm to the sustainable development paradigm, with equity at its center. 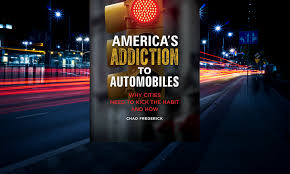 Chad Frederick is an instructor of public affairs at Sullivan University in Louisville, Kentucky and a senior research associate at the Center for Sustainable Urban Neighborhoods at the University of Louisville. Visit his new blog, Cities are the Key or connect with him via Twitter @CitiesAreTheKey. The introduction and first chapter can be read for free following this link to book’s publisher.

THE GROWTH PARADIGM: MEASURING NOTHING

Cities are currently developed, maintained, and most importantly, governed according to the standard of growth, particularly economic growth. Despite being shown insufficient for the task of producing stable, just, and sustainable cities, the resilience of the growth paradigm is that it has become a habit; it is “normal.” It has been around long enough, and has been correlated to progress and stability well enough, to pre-empt any discussion of evolving beyond it. As Stephen Purdey (2010) writes, “The paradigm is thoroughly implicit in all aspects of the socio-economic and political life of modern human society, and as such is so transparently normal that its presence, character and consequences rarely provoke critical scrutiny” (p. 8). In this way, it is quite powerful.

The growth paradigm is based on the deeply flawed and utopian assumption that growth creates all the other good things in life, such as quality of life, stability, and opportunity. For example, it is popularly—but uncritically—assumed that as the economy grows, more people can join the middle class. Certainly, the middle class has grown since the 18th century; the Industrial Age created the conditions for the growth paradigm to emerge. But correlation is not causation. The fact that the middle class grew as the national economy grew over the past 200 years has less to do with some “natural outcome” of a growing economy, and more to do with people actively and collectively advocating on their own behalf, particularly by demanding higher wages that otherwise would not have been given.

Still, whatever the case might have been from the founding of the United States until the end of World War II, there is no correlation between the size and strength of the middle class and growth in the U.S. economy since then. In fact, from 1980 to 2014, the correlation is negative. The Center for American Progress (Miller and Madland 2014) reported that “the share of working-age households falling into the middle-class range fell from 56.5% in 1979 to only 45.1% in 2012.” In contrast, according to the Organisation for Economic Co-operation and Development (2016) (OECD), the national economy grew from $12,500 per capita to nearly $56,000 per capita in 2014.

How can this be? The measure of gross domestic product (GDP), whether for a city, a state, or a country, is neither a measure of societal well-being nor a measure of distribution. It is only a measure of overall economic activity. It gives no indication whatsoever as to who benefits from the growth, or what is grown. It is context-free. As Robert Kennedy famously remarked in 1968, GDP includes things like “air pollution and cigarette advertising, and ambulances to clear our highways of carnage” (Kennedy 1968). Theoretically, the economic activity being measured by GDP could consist of a single resident financially benefitting from systematically tearing down a city and turning it into an enormous parking lot. The resulting dollar figure, while impressive, would reflect none of that. In a very real sense, most measures of growth are often meaningless. Even something as ostensibly positive as the number of new jobs can be misleading. For example, the National Employment Law Project (2014) reports that:

Focusing on the growth in jobs hides the fact that the “recovery” was a downward economic shift possibly unparalleled in human history. Facts are often meaningless outside a context, and growth does not provide a context.

Aside from being normal, there are many reasons why the growth paradigm is resilient to change. Private interests with enormous political and economic authority have their wealth and power tied into it; they will be unlikely to question its usefulness. A great many U.S. citizens across society have also been convinced to associate economic growth with capitalism; but the Soviet Union’s economy enjoyed a healthy rate of growth right up until its demise in 1989. At a deeper level, however—at least regarding the maintenance of cities—maximizing growth requires getting the highest return with the least amount of effort. This means taking the path of least resistance toward meeting goals, and not just physically or financially, but conceptually. It is easy to grow. For example, we know how to make our central cities more multimodal, and we even know how to retrofit sprawling suburbs. Still, the application of such strategies requires creativity; that takes time, and thus, costs money, the result being that it happens much less.

However, perhaps the deepest problem of all is that there is nothing established to compete with the growth paradigm. As former British prime minister Margaret Thatcher famously said, “There is no alternative” to the principle of growth-oriented economic development as a means to improve society. There has never been a serious attempt to move beyond growth; growth was even the basic operating principle for communism, at least in practice. The Soviet Union’s early five-year plans were remarkably productive in terms of industrial output, despite a global depression, and at extreme environmental cost. What should be evident is that growth is a poor basis for something as crucial to our survival as the management of the social and ecological world, whether in the hands of capitalists or communists.

A friend asked, “Granted that growth does not automatically, or even naturally, cause greater overall prosperity—but how do you get prosperity without growth?” There is a difference between growth and development. According to Herman Daly (1996), a central figure in ecological economics, economists under the growth paradigm begin with the assumption that nonphysical (e.g., social) concerns such as the current level of technology, consumer preferences, and income distributions are fixed; that is, they are given inputs to economic questions. Meanwhile, all the elements that constitute the physical (e.g., material) side of production are not fixed; instead, they are outputs that adjust to the nonphysical givens. If people demand cars, then the number of cars being produced adjusts to that level of demand, including the resources required—the amount of mined metals, manufactured plastic, substitute materials, etc.

In the era of classical economics, before the Industrial Age, and before global transportation of raw materials and finished goods became as incredibly cheap as it is now, the reverse was true. Economists like Malthus, Mills, and Ricardo understood that the local material world was finite: the amount of land, for example, was fixed. There was only so much iron in the nearby hills. Sheep could only grow so much wool on the fields that you could access. Other hills full of iron and fields of grass existed, certainly, but their locations were largely unknown, and the costs of transportation were prohibitive.

Economists who have shifted to a developmental paradigm approach economics in a way similar to these classic economists. They begin with the physical, material side: what can be produced, given a finite world? Correspondingly, it is the social concerns which are variable, and it is they that must adjust to those fixed physical limitations. There are still outputs; things are still produced, and money, of course, is still made. However, the focus is on quality, not quantity. It is not a matter of producing but of what is produced. And it is our dwindling natural capital which makes this shift necessary. As Daly puts it, these diminishing resources force us to shift from counting the number of fishing boats to counting the number of fish remaining in the sea (ibid. p. 8). Growing for the sake of growth is not enough, and it leads to terrible outcomes. Thus, all development is growth—but not all growth is development.

Even if it were true that growth equals progress—and it does not—this would be undeniably useless for helping us survive. Growth cannot be both the problem and the solution. The developmental economic paradigm needs to come back, but how? An alternative underlying logic for shaping the development of cities will be necessary if we are to make them functionally multimodal and everything else we need them to be if we are to at least survive and, at best, flourish. The good news is that, once we take systems seriously, provide a new logic, and make the old model obsolete, all the knowledge and research on how to make cities less automobile dependent (and everything else: more just, resilient, fair, clean, safe, etc.) will be there ready to implement.

One Reply to “The Growth Paradigm: Measuring Nothing”