Pandemics are ecological issues. Viral outbreaks often emerge at the intersection of human society and wildlife, and a relationship of domination that the former has with the latter.

It is impossible to pay attention to the media today without hearing about coronavirus. Everywhere we look, we hear stories of stockpiling toilet paper and sanitizing products, talk of quarantine and fear of sickness. According to the World Health Organization, “there are now more than 118,000 cases in 114 countries, and 4,291 people have lost their lives.”

The virus has also become a social justice issue. Those of Chinese and East Asian ethnicity are subjected to racist discrimination and xenophobia; immunocompromised individuals are left to worry about their safety; and working-class people are reminded of the complete lack of support systems for public health.

But while we must face the seriousness of the current situation, it is also important that we understand how the current crisis emerged and how its spread can be prevented.

Coronaviruses are zoonotic, meaning they are transmitted between animals and people. The current outbreak is thought to have its origins in the Chinese city of Wuhan, where it is speculated that the first cases of this virus are linked with the Huanan Seafood Wholesale Market. It is unclear exactly which wild creature the virus may have originated from, but this question obscures one of the roots of our increasing vulnerability to pandemics: habitat loss.

A recent article published by The Nation tells us how since 1940 hundreds of germs have emerged into new areas where they have not been seen before. The majority of them originate in animals. Some come from pets and livestock, but most of them come from wildlife.

But this is not the fault of the animals, the bodies of which most of these microbes live harmlessly in without posing any particular danger to us. “The problem,” according to The Nation, “is the way that cutting down forests and expanding towns, cities, and industrial activities creates pathways for animal microbes to adapt to the human body.” 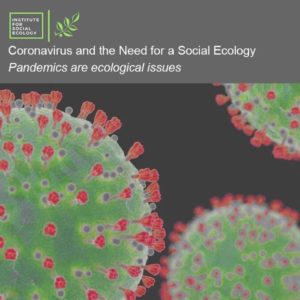 Social ecology recognizes that our current market society is based on capitalism’s need for endless growth. It is this grow-or-die logic that necessarily brings capitalist enterprise into conflict with wildlife in the pursuit of profit, forcing these animals into either dwindling remaining habitat or onto the market itself. And it is exactly this repeated, close contact that allows the microbes that live in the bodies of animals to cross over into our own. When this happens, these microbes can turn into deadly human pathogens.

The domination of nature has reached crisis proportions under capitalism, and viral outbreaks are yet another ecological problem. There are ways that we can prevent the spread of these pathogens: wash your hands, disinfect your phone, don’t touch your face and self-quarantine if you exhibit symptoms of being sick. But without addressing the root causes of these issues—capitalism and the idea of dominating nature—these sorts of problems will only worsen.

Social ecology offers an alternative vision of what an ecological and socially just world might look like – a world organized around care instead of domination that fosters a reharmonization of humanity and non-human nature.