Skip to content
Institute for Social Ecology > Article Archive > When We Lose the Ability to Be Shocked, Fascism Has Already Arrived

According to the clever people, fascism was impossible in the West. Clever people have always made things easy for barbarians, because they are so stupid” 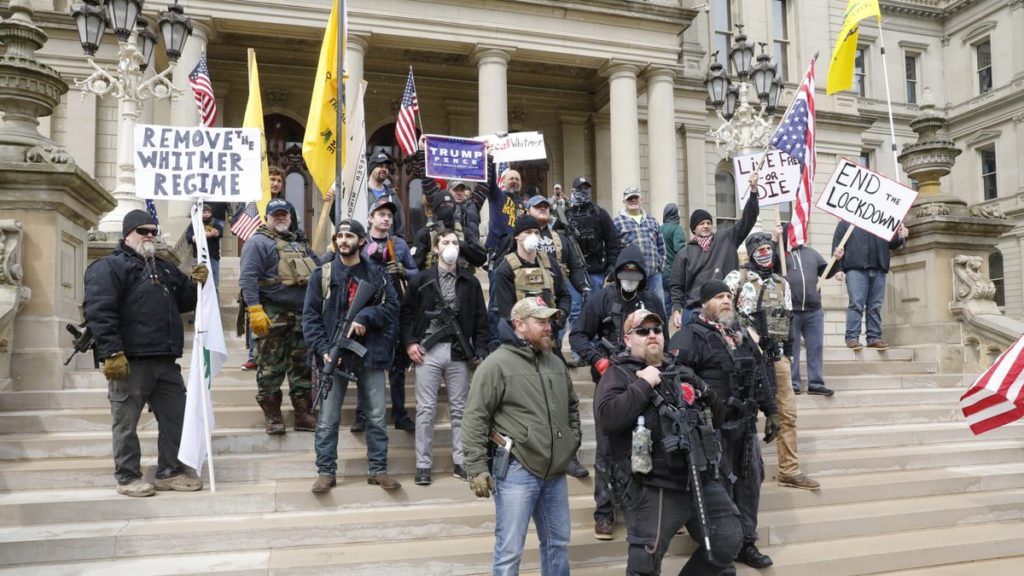 Whether democratic or despotic, states draw their legitimacy from their claim to the general will of the public. While that questionable legitimacy fluctuates immensely in different circumstances and contexts, any regressive attempt to replace the power of “the sovereign” with the rule of a particular sectarian or racist group could translate into a Hobbesian nightmare of a “war of all of against all.” Today, volkisch movements in several countries are gradually eating away all that could be considered the public foundation of the state. The decline of the bourgeois state will be disastrous in such a regressive scenario.

A pattern of deterioration of the state is now visible from the USA and Brazil to India and Turkey despite the gulf that separates them in terms of political traditions, institutional practices, and constitutional protections of human rights. In each case, the public sphere is continually shrinking under the pressure of a mass movement that shows three incredibly dangerous symptoms: racism, religious fundamentalism, and a populist leader whose popularity among his volkisch base often increases the more anti-democratically he behaves. Undoubtedly, the list can be expanded to include other states such as Hungary and the Philippines, but I will limit this short article to four cases (the leading democracy in the world; the largest country in Latin America; the largest democracy in the world; and the NATO member state with the second-largest army after the USA). We should also keep in mind that the number of failed states – like Libya, Yemen, and Iraq – will only increase as economic devastation intensifies in the global south in the coming months and years.

It is not difficult to anticipate where the world is heading unless a new international order emerges in response to the global challenges to which there can be no national solutions. In a world that is already suffering from extremism and multiple wars, this slide into volkisch rule could mean the final push into a historical abyss. With the collapse of the global economy and a drastic increase in unemployment, it is also easy to anticipate that the ensuing increase in poverty will lead to such a sharp upsurge in violence and crime that political instability will be inevitable. Volkisch movements will find in such a crisis the perfect climate to make their ultimate reactionary moves – moves that could, in turn, result in knocking down the state as the (in principle) guarantor of equality under the law.

In the United States, Trumpism has already done more than merely embolden ultra-right groups, from white supremacists to Christian fundamentalists. For the first time in American history, the highest authority in the federal government is encouraging disobedience against state governments. Armed groups of white men have already paraded on city streets with the utmost ease (imagine if African Americans did anything of that sort). Donald Trump realizes that his power lays with the reactionaries, ultraconservatives, and Christian fundamentalists. Moreover, so far, he has not shown much respect for the separation of powers thereby undermining the constitution and violating one of the most essential conditions of representative democracy on which the republic was founded.  With his self-declared “war president” authority, the ultimate take over only awaits the moment of a serious crisis, which seems inevitable given the administration’s failure in handling the pandemic and subsequent chaos in the most vital sectors from public health to the economy. Every disaster has its own signs, which are real and physical like the catastrophe that follows them. We witness the (more-than-signs) of the coming disaster every time we tune into a White House press conference. One cannot help but feel sorry for the representatives of scientific authority in the room. Yet, it is Trump’s supporters who rally in protest without any sense of irony. In December 2020 and January 2021, if things get out of control, it will be Trump’s supporters who will use those same machine guns to take over what is left of the state.

In Brazil, where democracy stands on much shakier grounds given the country’s history with military rule, the danger is even more imminent. Jair Bolsonaro has been more vocal than Donald Trump in his exclusionary, racist, and sexist beliefs. Like Trump, he too resisted taking the necessary steps recommended by the World Health Organization to prevent the spread of COVID-19 beyond control. He even fired his health minister, who had asked people to practice social distancing. To make things worse, he has insinuated imposing military rule and joined rallies that asked for a military takeover to end the provincial governments’ lockdown policies aimed at slowing down the spread of COVID-19. Following the April 19 right-wing rallies, which Bolsonaro himself attended, the Supreme Court has been investigating a possible violation of the constitution and National Security Law, both of which prohibit attacks on democracy in the country. However, in the case of a military coup the Supreme Court itself, like many other state institutions, will become the first victim. Bolsonaro’s repeated anti-democratic comments are more than mere flirtations with the army, as it became ever clearer in 2019 when he reinstated commemoration of the March 1964 coup that lasted for two decades. As he continues to lose his allies in the government and congress, he might resort to the military sooner than we like to think.

As for India, Narendra Modi has been an example of a nationalist leader who is destroying all that could glue together the diverse peoples of the country he leads. His Bharatiya Janata Party (BJP) barely makes an effort to hide its discriminatory discourse, especially against perceived Indian Muslims. The increase of sectarianism both in the ruling party’s discourse and the government’s policies, from Assam to Kashmir, directly feeds Islamist fundamentalist leaders in both India and Pakistan, which in turn will make things worse in the cycle of victimization and demonization. In provoking and magnifying the Hindu-Muslim pseudo-dichotomy, hundreds of other ethnic and religious groups are subjected to even more marginalization across all regions of India. For months Indians from various backgrounds, including Hindus, protested against Modi’s problematic Citizenship Bill amendment. However, the coronavirus pandemic provided an excellent opportunity for Modi to impose his rule in a totalitarian fashion. The near future seems breathtakingly catastrophic for a society of 1.53 billion people that already suffers from casteism, extreme inequality, systemic discrimination, and the rise of Hindutva. The BJP plans to turn India into a state similar to Pakistan or Myanmar where racist and religious discrimination is legalized and committed institutionally, and the notion of “nationhood” is more regressively homogenized. However, the sheer size of India’s population makes the magnitude of the fascist policies unprecedented. As a typical nationalist obsessed with a mythic pure and glorious origin of the “nation”, Modi will bring more destruction upon the Indian society and state than any actual enemy of Hindus could.

Erdogan is one among a number of populist leaders who rose to power through elections within the last decade or so. Most societies are currently ruled by a number of self-centered men, none of whom – in a more rational world – would qualify to be in charge of an animal farm let alone a country. What makes each of them stand out is his ability to be the “great little man,” to use Adorno’s expression; for they assume the role of a father figure and savior who speaks the language of the mass individual, thereby making the process of identification possible (Adorno 2001; 2004). The threat of volkisch movements has always been present in modern history, but it is in times of crises that they can gain enough momentum to seize power swiftly. Today, volkisch leaders are already ruling some of the most influential global and regional states. It is a matter of course that the upcoming economic crises will unmask the worst of these leaders and their supporters.

The overall image is more disturbing than that of a group of populist leaders undermining democratic values. If democracy continues to lose ground in the USA, Brazil, and India, we are already speaking of a world in which less than 10 percent of its population will be living under some form of a democracy. Despite its external strength, democracy is arguably the most vulnerable system internally simply because it allows for anti-democratic forces to exploit democratic means. Therefore, it is not surprising that today in liberal democracies it is antidemocratic groups, by definition against freedom of speech, who most visibly appeal to the right to free speech; even more than contemporary liberals and leftists do. In fact, fascist movements across the world use the same strategy of climbing to power, i.e. democratically. Once in power, democracy becomes a sham until it is eventually buried, usually as an immediate reaction to a crisis that, whether resulting from conspiracy or their bad policies, is often created by the fascists themselves. It is during the period of habitual violations of democratic customs and institutions when the (bourgeois) public begins to lose its sense and sensitivities. Fascist absurdities, cynicism, and vulgarity are increasingly absorbed by the public with a mixture of apathy and exhaustion (in the American case, comedy live shows seem to be the third ingredient). The bottom line is that when the public loses the ability to be shocked, one can be sure fascism has already arrived.

The ensuing crises caused by the pandemic will make things substantially worse, unless new movements across the world emerge forcefully and urgently. Fascist movements will not miss this opportunity to push for full control. The old world is becoming monstrous both microscopically and ecologically; a new one must be created while the last window for democratic action still remains open for some of us.

Adorno, Theodor. 2004. “Antisemitism and Fascist Propaganda,” in Stars Down to Earth and Other Essays on the Irrational in Culture. Edited by Stephen Crook. London: Routledge, pp. 218-232.

Saladdin Ahmed is the author of Totalitarian Space and the Destruction of Aura (SUNY, 2019). He holds a Ph.D. in Philosophy from the University of Ottawa and currently a visiting professor of political theory at Union College in Schenectady, New York. @SaladdinAhme