Welcome to the first edition of our second volume of Harbinger, A Journal of Social Ecology. Harbinger is the latest in a long line of publications offered by the Institute for Social Ecology (ISE). With the second edition of Harbinger, we are resurrecting a journal that we published in the 80s. We intend to explore the theory and practice needed to help to create an ecological society, and to cultivate a generous intellectual outlook that can inform the principle of hope. . .

Murray Bookchin, born in 1921, has been involved in leftist politics for seven decades and has written almost two dozen books on a great variety of subjects, encompassing ecology, nature philosophy, history, urban studies, and the Left, particularly Marxism and anarchism. In the 1950s, with his long 1952 essay “The Problem of Chemicals in Food,” he warned against the chemicalization of agriculture and the environment, and with this and other writings, he helped lay foundations of the modern radical ecology movement. He is the cofounder of the Institute for Social Ecology, where he lectures each summer, and professor emeritus at Ramapo College of New Jersey. He is currently finishing the third volume of a trilogy, /The Third Revolution,/ which is a history of the great European and American revolutions.

The more that officials of the U.S. government, and of global institutions such as the WTO, insist that only known, quantifiable risks are legitimate areas for public policy, the more imperative it becomes for activists and other concerned citizens to insist upon raising the larger questions: What does this new technology mean for our society, for the exercise of political and economic power and for the possibilities of actualizing a genuinely free society? How can we fully comprehend all the disturbing
social consequences of the new genetic technologies?

Urban Seeds: What a Cornfield in Kansas and Blvd. Renee Levesque Have in Common

On urban agriculture and saving seeds…

Hungry for Profit: The Agribusiness Threat to Farmers, Food, and the Environment
Edited by Fred Magdoff, John Bellamy Foster, and Frederick H. Buttel

Harbinger Vol. 2 No. 1 — The Oromo and the Ethiopian Empire State; An interview with Amaan

Interviewed by Michael Caplan Amaan, a recent refugee to the United States, participated in the Institute For Social Ecology’s Ecology and Community program in the summer of 1999.  Amaan is …

END_OF_DOCUMENT_TOKEN_TO_BE_REPLACED 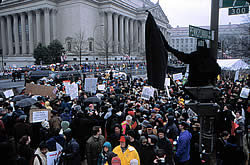 Harbinger Vol. 2 No. 1 — Prefigurative Politics in the Pro-Democracy Movement

Amoshaun Toft As we were unwillingly ushering in a new presidential administration on January 20th of this year, thousands of people gathered in Washington DC to voice their opposition to …

END_OF_DOCUMENT_TOKEN_TO_BE_REPLACED

Harbinger Vol. 2 No. 1 — Toward a Historical Perspective of Libertarian and Anarchist Education in the United States

Kai Molloy To explain the endurance and commitment to anarchism by many American radicals throughout the twentieth century, most contemporary historians, scholars, and even radicals have repeatedly emphasized the social, …

END_OF_DOCUMENT_TOKEN_TO_BE_REPLACED

Cindy Milstein The amorphous movement that has appeared on the scene of late—in North America, after Seattle, and around the world several years prior—exhibits an astonishing diversity of tactics, goals, …