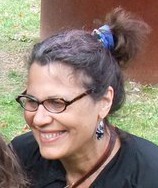 Beverly Naidus is an internationally recognized artist on the faculty at UW-Tacoma where she teaches courses in art for social change and healing. Interdisciplinary to her core, she works in many mediums, allowing the content to determine the form.  Themes in her work include the ecological crisis, fear of difference, unemployment, nuclear nightmares and her dreams for a reconstructed world.   She has displayed her work on city streets, subways and buses, in major museums, libraries, hospitals, community centers, commercial and university galleries and alternative spaces.

For over three decades she has straddled the high art world and the activist art and community arts worlds, finding it important to share ideas and art projects in all three, sometimes overlapping contexts.  Her work has been discussed in books by Lucy R. Lippard, Suzi Gablik, Paul Von Blum and Lisa Bloom, as well as in significant journals and newspapers.  She is the author of Arts for Change: Teaching Outside the Frame, New Village Press, 2009 as well as two artist’s books, One Size Does Not Fit All and What Kinda Name is That.

From 1991 to 2002 she taught activist art at ISE’s summer residency program, often co-teaching the course with her husband, Bob Spivey.  She has also taught at Carleton College, Goddard College’s low residency BA, MA and MFA in Interdisciplinary Arts, Hampshire College and California State University, Long Beach.   She now shares a home and garden on Vashon Island in Washington State with Bob (founder of SEEDS) and their teenage son, Sam.

Her websites are beverlynaidus.net and www.artsforchange.org and her blog for her current eco-art project is www.edenreframed.blogspot.com

How did you become introduced to the ideas of social ecology? How do you define social ecology when asked about it?
I was introduced to social ecology via my life partner, Bob Spivey, in 1988, soon after we met for the first time.   He had just returned from his first residency at ISE.  His experience inspired both of us to think more deeply about the society we wanted to live in and help create.  Bob then went on to pursue his MA in Social Ecology with a focus activist art.  I was one of the activist artists in Los Angeles that he interviewed for his thesis.   As a result of his graduating presentation at the Goddard residency, there was a heightened interest in activist art among members of the ISE community. In the summer of 1991, ISE invited me to come as a visiting artist (Bob came as Dan’s teaching assistant). I was able to immerse myself in the ISE experience. listen to talks, participate in Chaia Heller’s classes, facilitate art projects and live and play in the community. That summer I felt like I’d tasted and glimpsed utopia in ways that were irresistible.

Bob had told me several times when we first met that I was creating art that seemed to emerge from ideas basic to social ecology.  I was unclear as to what he meant until that summer.  I had resisted, like many artists of my generation, from aligning too closely with any ideological bent in my work.  I had even been leery claiming feminist art as a theoretical source (early versions of the latter were highly dogmatic).  But I realized that by claiming that supposedly neutral ideological zone, I was actually clinging to privilege and alienation – neither position served my goals as an activist artist who was working for liberation and justice.  The questions I was asking in my audience participatory installations (about unemployment, racism, body image, nuclear war and ecological disaster) were definitely informed by a discourse that sees that all things are connected, the social justice issues and the ecological ones.  So when I am asked to define social ecology I tell people that it’s a theory that defines the mess we’re in, the complex power relationships, the systems of oppression and the ways consumer society has commodified all aspects of life.  But most importantly it offers us possibilities and tools for imagining the world we want to live in.

How does social ecology and/or your experience with the Institute for Social Ecology influence your current work?
Over the past twenty years my work has become more oriented towards reconstructive visions of the future, while still offering a critique of the present.  I have found that audiences and students really gravitate to that strategy.  When I was hired to teach at UW Tacoma in their Interdisciplinary Arts and Sciences program, I learned that I could create the arts curriculum from scratch.  They said to me, right after I was hired: ” you can teach whatever you want.”  So I developed a curriculum in art for social change and healing.  The courses were inspired by the topics that inform my own work.  Instead of courses in drawing, painting and sculpture, I teach Art in a Time of War, Eco-art, Cultural Identity and Art, Labor, Globalization and Art, Body Image and Art, Community Arts Practice and The Artist as Visionary and Dreamer.  Students make art about the topic from their own life experience, learn about the topic, and see art that focuses on the topic.  I’ve written a book about the influences on my pedagogy called Arts for Change: Teaching Outside the Frame (New Village, 2009) and it includes stories from 33 other artists who work with a social change approach to art pedagogy.

The book combines a visionary fable with memoir, theory, history and practical information. I would not have had to courage to write a book in that way had it not been for the liberatory influences of ISE.  The book explicitly references ISE and social ecology.  The experiences I had at ISE also grounded me so that I could take on the challenges of working with the students I have in Tacoma.  They are non-traditional students – many come from the military, are raising children, working one or more jobs, etc.  They are often working class and the first in their families to go to college.  Their politics are often derived from a mixture of mainstream pop culture, Fox News and Fundamentalist Christianity.  Working with them can often be like teaching on the front line.  I don’t think I would have been attracted to working with this audience had I not been at ISE.  Most of my students are not planning to become artists, so I am using art to help expand their minds, to deepen their sense of who they are and their responsibilities as citizens, and to encourage them to use critical thinking.  If they leave my class feeling like their stories were heard and they are questioning dominant culture’s values, then I’ve done my job.
My current project, EDEN REFRAMED, is also influenced by my experiences with ISE, since it was inspired by my work with our local organization, SEEDS, an offshoot of ISE.   It is a community-based eco-art project that will remediate damaged soil with mushrooms and plants.  It will demonstrate permaculture design in a food forest garden.  It will also offer an archive of community stories about gardening in sculptural story hives and benches.  It will be placed in a park on Vashon Island, where the soil is damaged by the particulate from a smelter plume coming from Tacoma (the smelter was closed in the 1980s but was active for many decades).  This project is funded by the Royalty Research Foundation on the UW campus.

What do you see as the greatest opportunities and greatest challenges for achieving a sustainable relationship between humanity and the wider world?
Art provides a great strategy for embodying the concepts of social ecology.   More activists need to use art to create grass roots movements.   I would like to see an Arts Corp developed to go out into communities to raise consciousness, create dialog and empower folks.  One challenge is that most of our society is visually illiterate and frightened of material that asks difficult questions.  The ones who are visually literature have often bought into consumer society or are cynical about art’s power.   And many of us continue to be afraid to imagine utopia.  I will be curating a show in September that invites artists from around the world to imagine utopia and send their images on paper to be hung on the gallery wall.

Any great stories about being around the ISE?

Because of ISE I began to believe that a different future, other than ecocide was possible.  As a result, while co-teaching “Activist Art in Community” at residency at ISE in 1994, we made the decision to leave Los Angeles, abandon my tenured position and take a leap of faith.  When I announced that decision at a community meeting, we received a standing ovation.  Four days later our son was conceived. Sam, our son, attended his first ISE residency when he was two months old, and the community at Goddard and Maple Hill became his for part of his first seven summers. When our son was only six weeks old, we moved to Western Massachusetts where we could schmooze more easily with colleagues from ISE as we struggled to create a new life, teach part time, make art and raise our son.

Without ISE our family as it is would not exist.

After six years of writing dozens of job applications, and 18 interviews, I finally found the right fit at UW Tacoma, and we moved west to live on Vashon Island.  Soon after arriving here, I was contacted by a musician and activist named Bill Moyer who was creating an activist art organization called The Backbone Campaign.  He had learned about me from art historian in D.C. and had no idea when he contacted me that I had just become his island neighbor.  And, low and behold, Bill was also an ISE alum. Bill and Bob went on to develop the platform issues for the Backbone, and we’ve been part of their advisory council ever since.  I helped raise money for the fledgling organization by doing performative talks on activist art, and to my amazement, the locals would write big checks after hearing me talk about the history of activist art.
ISE continues to weave in and out of our lives in so many extraordinary ways, that it is impossible to name them all.  My gratitude to the Institute is immense.