Between Occultism and Nazism:
Anthroposophy and the Politics of Race in the Fascist Era 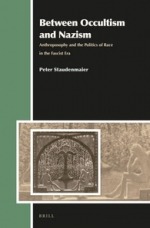 The relationship between Nazism and occultism has been an object of fascination and speculation for decades. Peter Staudenmaier’s Between Occultism and Nazism provides a detailed historical examination centered on the anthroposophist movement founded by Rudolf Steiner. Its surprising findings reveal a remarkable level of Nazi support for Waldorf schools, biodynamic farming, and other anthroposophist initiatives, even as Nazi officials attempted to suppress occult tendencies. The book also includes an analysis of anthroposophist involvement in the racial policies of Fascist Italy. Based on extensive archival research, this study offers rich material on controversial questions about the nature of esoteric spirituality and alternative cultural ideals and their political resonance.