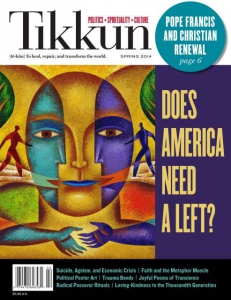 This special feature in Tikkun‘s Spring 2014 issue contains many prominent voices, including three people with long histories with the Institute for Social Ecology: Chaia Heller, Blair Taylor and Janet Biehl.  They join other well-known writers, including Barbara Ehrenreich, Stanley Aronowitz and Michael Lerner, in addressing this important question. This Table of Contents mirrors the print version of the symposium, and a second set of articles, including Blair’s, are posted as Online Exclusives.

Here are links to the three articles that feature perspectives from social ecology:

Enter the Alter-Left: Reviving Our Revolutionary Nerve
by Chaia Heller

To Be Realistic, Demand the Impossible: Toward a Visionary Left
by Blair Taylor

Here’s a short excerpt from Chaia’s article, which reviews the evolution of the “alter-left” from Zapatismo to Seattle to Occupy Wall Street:

Social ecology offers four key principles upon which to ground political action: horizontalism (non-hierarchy), direct democracy (self-determination), social justice, and ecology. These principles are intentionally general, ready to be interpreted or adapted by diverse peoples around the world seeking to create a just and free society. Social ecology calls for unity in diversity; in this context, “unity” means shared commitment to these four principles, while “diversity” means each community is free to put its unique cultural stamp on the way each principle is translated into everyday life.

Putting this idea of unity in diversity into practice means incrementally transforming this existing (and failing) world of hierarchical states into a horizontal community of communities. This could assume the form of regional, continental, and even international confederations. In this way, each town, village, city, or neighborhood could enjoy a rich political life in which committed residents meet regularly in general assemblies to sculpt the political policies shaping their world. By engaging in face-to-face direct democracy, each community’s policy on education, production, technology, or science, for instance, would be accountable to a common confederal constitution grounded in the four ethical principles stated above. What we today call “economy” would be determined by the general assembly as community residents (communalists) apply principles of horizontalism, direct democracy, social justice, and ecology to the way common goods are produced and distributed. In this way, this communalist project would seek to democratize the economy, shedding a capitalist economy that normalizes today’s dominant principles of individualism, exploitation, and hierarchy…