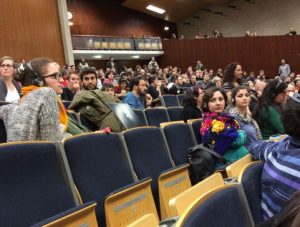 In Kurdish, “roj” means sun. Rojava is the land to the west, where the setting sun of freedom and possibility lays to rest and renew itself. Last week, I spent three days at Hamburg University as part of Challenging Capitalist Modernity, a conference hosted by a network of organizations within the Kurdish Freedom Movement. Each evening, the sun shone down brightly through a tall glass wall into the conference lobby. There hundreds of people gathered from all over Europe and the Middle East to share, discuss, and debate ideas for a democratic revolution.

Challenging Capitalist Modernity was a dense event, characterized by a very colorful range of speakers. In some ways, it was organized like an ordinary academic conference. University professors and PhD students stood at a podium and read excerpts of their work. Prominent leftist academics such as David Harvey, David Graeber and John Holloway offered their perspectives on Kurdish liberation; Harvey in particular highlighted the importance of Murray Bookchin in shaping these ideas. At one point he quipped about his own entanglements with social ecology, “Murray Bookchin said that the way forward was to bring the best of Marxism and anarchism together. I guess that means David [Graeber] and I have to write a book.”

Yet in other ways, Challenging Capitalist Modernity was very unlike a typical academic conference. Throughout the weekend, we received impassioned speeches from PKK and PYD leadership. On the topic of feminism and women’s revolution, we were addressed via Skype by a group of female militia commanders in Rojava. Before and after their address, the audience chanted “Biji berxwedana Kobane!” [Long live the resistance of Kobane!] until it shook the whole room. Conference participants were offered the chance to stay with members of the local Kurdish community. I myself spent my nights drinking tea, discussing politics, and playing with the children among my host family.

The conference offered a chance to glimpse at the rich, new ideas taking shape within the Kurdish Freedom Movement. Jineology, for instance, is a concept developed by Ocalan and other Kurdish feminist scholars that signals to the re-interpretation of history through the lens of feminist epistemology. Jineology is connected to a broader field of inquiry Kurdish activists call “the sociology of freedom.” This new scholarship promotes rigorous social theory in the pursuit of a free society, rather than disinterested, scientific “objectivity.”

Indeed, the meaningful progress Kurdish women have made toward a dialectically-informed feminist revolution is striking. In America, social issues tend to come in and out of fashion. These days, feminism (especially ecofeminism) has fallen out of style as stereotypes and caricatures bare down over the potent, liberatory potential of these perspectives. Women such as Havin Guneser, Asya Abdullah, and Emine Ayna remind us that women (indeed all people who suffer under gender and sex oppression) must cultivate our own sites of intellectual and social power. In Rojava, this takes the tangible form of the women’s units, which operate independently from the men’s and serve to project women not only from ISIS, but from male supremacy itself.

Each day more and more people are seeing the need for a coherent, historically grounded and utopic vision of a directly-democratic society. Social ecologists have been holding these insights and sharing them for decades. Through the Rojava Revolution, our movement for a socially just, ecological and directly-democratic society is growing and becoming more culturally and intellectually diverse.