From ROAR Magazine, an article by Carlos Delclós, a sociology researcher in Barcelona. Here’s an excerpt: 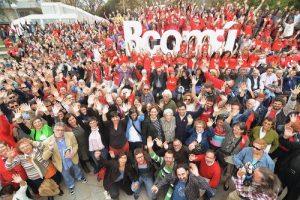 Radical municipal politics is not an altogether new concept, especially not in Spain. In Catalonia, the Popular Unity Candidacies of the left-wing independence movement have had a notable presence in smaller towns for several years (they also quadrupled their 2011 results on Sunday, for what it’s worth). At the southern end of the country, the Andalusian village of Marinaleda is a well-documented experiment in utopian communism that has been going on for over three decades now.

In fact, the so-called father of libertarian municipalism, social ecologist Murray Bookchin, was strongly inspired by the Spanish municipal politics of the 19th and early twentieth century, as well as the Swiss Grey Leagues and the New England townships, when he wrote his influential “New Municipal Agenda”.

While he hardly intended to prescribe a one-size-fits-all solution—especially not in large urban belts and port cities—in the text, Bookchin outlined four main coordinates: a revival of the citizens’ assembly, the need for confederation with other municipalities, grassroots politics as a school of genuine citizenship and the municipalization of the economy. Underlying all of these coordinates is “a recovery of a new participatory politics structured around free, self-empowered and active citizens”.

Full article is at http://roarmag.org/2015/05/spain-elections-municipalism-colau-bookchin.