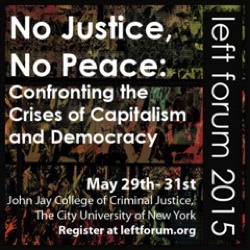 Once again social ecology will be on the agenda at the Left Forum in New York, May 29-31st at John Jay College (524 West 59th St.), with ISE faculty and colleagues featured on 2 panels:

The Next Revolution: Popular Assemblies and the Promise of Direct Democracy

In left movements around the world the cry for direct democracy has never been stronger. But how can the mass protests that have occupied squares and cities be given institutional form so that they have lasting political power? This panel will use the essays collected in Murray Bookchin’s new book on popular assemblies as a starting point for examining the promise of direct democracy, both theoretically, and in the real-life examples of the Kurdish canton movement and horizontalist efforts in other parts of the world. We will explore how these concepts of democratic autonomy, assembly self-rule, a municipal-based economy and confederated communities can be employed by social justice movements in the U.S. to build a powerful counter-force to the nation-state and finally move from protest to transformation.

Extractivisms, North and South and in Between

As a number of economies North and South engage in the “race for what’s left” around key natural resources, extractivism is playing an increasingly central role in their capitalist development and accumulation patterns. Extractivism and now neo-extractivism, are hotly debated throughout the left globally. For some it is seen as the only option for growth, and thus it must be socialized and mobilized as a lever of social and economic development. For others, it only enhances dependence on capitalist world markets controlled by monopolistic corporations, a problem further exacerbated by its ecological contradictions and reliance on practices of dispossession. The panel will explore three different cases where extractivism is currently debated, contested and resisted: BRICS countries, Latin America and Canada.

The Left Forum is the largest annual conference of the broad Left in the United States. Each spring thousands of conference participants come together to discuss pressing local, national and global issues; to better understand commonalities and differences, and alternatives to current predicaments; or to share ideas to help build social movements to transform the world.  Register at www.leftforum.org.

One Reply to “Social ecologists at Left Forum 2015 in NYC”