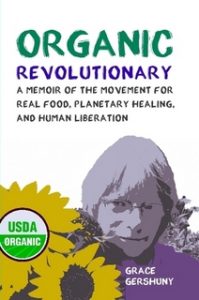 ISE faculty member Grace Gershuny’s long-awaited memoir has just been released, under the imprint of Joe’s Brook Press in Barnet, Vermont. The book, Organic Revolutionary: A Memoir of the Movement for Real Food, Planetary Healing, and Human Liberation, illuminates Grace’s roots in the early 1970s back-to-the-land movement, her early engagement with soil science and the emergence of organic farming in northern New England, her discovery of social ecology and socially-engaged Buddhism, and her intimate role in the development of national organic standards.

Canadian organic pioneer Howie Ross calls Organic Revolutionary “a compelling tale of the inner workings of the organic community and the organic industry and the processes and characters involved.” Former Organic Trade Association President Joe Smillie calls it “essential reading.” Vermont author Reeve Lindbergh describes it as “a thoughtfully comprehensive, entertaining and deeply personal account of her adventures in the (organic) movement.” Books can be ordered online from Lulu.com.

It has taken me fifteen years and endless soul searching to tell this story… I was a principal author of the USDA’s first proposed National Organic rule, and left the National Organic Program staff shortly before the final rule was published. The story of this process, which consumed much of my life for five years, is interwoven here with the story of my movement along my own personal timeline before, during, and after this arduous federal process. It’s the story of how the organic revolution became rooted well before the federal government cared to notice, and the personal, political, and practical struggles that ensued in the heroic effort to move it beyond farmers’ markets and into supermarkets.

… Today’s young food activists and aspiring farmers often accept as a given that the organic label has lost its meaning. They believe that ‘industrial organic’ is no better than conventional agriculture, and that ‘local is the new organic.’ Those assumptions must be challenged, without defusing the passion and commitment of this burgeoning movement for real food.

So I have persisted in polishing this story, offered in the hope that the growing revolution in producing, preserving and distributing food will continue picking up steam–without picking fights that could ultimately undermine its success. What will it take to bring this about?