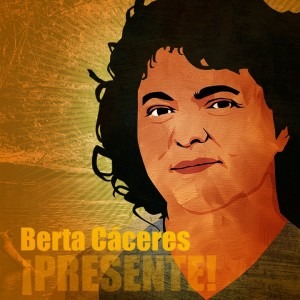 The ISE was among more than 30 organizations that signed on to a press statement expressing outrage at the early March assassination of Berta Cáceres, a leading indigenous activist in Honduras.  The full text is available at the US Food Sovereignty Alliance website.  Further background on Cáceres’ work to defend indigenous land rights from logging, mining mega-hydroelectric and other interests is available in this 2013 article from journalist/activist Jeff Conant. The case has also highlighted ongoing concerns about the current Honduran regime, which was the product of a 2009 US-supported coup.

Here are some excerpts from the statement:

As General Coordinator of the Civic Council of Grassroots and Indigenous Organizations of Honduras (COPINH), Berta Cáceres was an organizer working at the frontlines in the struggle against the expropriation of land and water from her community by the construction of the Agua Zarca hydropower dam project in the Gualcarque River basin, promoted by the company Desarrollos Energéticos S.A. (DESA) and financed by foreign investors. She was a courageous voice in defense of Lenca communities and the struggle for the rights of people and of Mother Earth.

… The atrocious crime happened just three months shy of the seventh anniversary of the coup d’état that devastated Honduras and had rippling effects across the American continent. In the first year of the coup, 43 people were killed – half of them were trade union members. Since 2009, there have been over 100 organizers killed, many of them Indigenous Peoples and small scale farmers engaged in nonviolent struggles for land and territory, including Tomás Garcia of COPINH and Margarita Murillo of La Vía Campesina Honduras.