Skip to content
Institute for Social Ecology > Article Archive > Z.A.D. and the Revenge Against the Commons, by John Jordan
ISE affiliate and longtime activist John Jordan has written an account of the Z.A.D. autonomous territory in Western France that is now under attack by the French state.

“As you may well know, Isa and I and our collective the Laboratory of Insurrectionary Imagination moved to the autonomous territory of the zad in western France a few years back. As you may also know these 4000 acres of liberated land against an airport and its world is being evicted by the french state as I write, with 2500 gendarmes, armoured cars, drones and helicopters, because an example of life despite the state and capitalism cannot be left to flourish even though the people who live there won the 50 year struggle against the airport and now claim that the land should be held in common by them.”

You can read the full account, which covers the history of the ZAD up to the current eviction, here: THE REVENGE OF THE COMMONS, 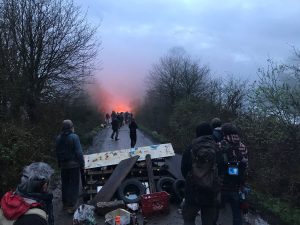