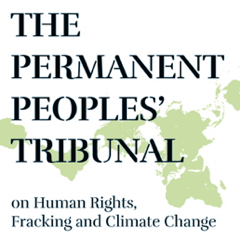 The historic Permanent Peoples’ Tribunal Session on Human Rights, Fracking, and Climate Change took place on May 14th – 18th, co-hosted by the Spring Creek Project for Ideas, Nature, and the Written Word.  The Permanent Peoples’ Tribunal (PPT or Tribunal) is a highly respected international forum that grew from the Russell-Sartre Tribunal to investigate whether breaches of human rights norms occurred during the Vietnam War.  Based in Rome, Italy, the Tribunal was constituted in November 1966, and was conducted in two sessions in 1967, in Stockholm, Sweden and Roskilde Denmark. Since then it has conducted a series of high-profile hearings to determine whether human rights standards were abridged in Bhopal, Chernobyl, and other sites worldwide. The Tribunal’s most recent session was on Myanmar’s (Burma’s) crimes against the Rohingya and Kachin refugees.

The PPT is built around an international network of experts, social actors and scholars from several countries of Europe, South America, Asia and Africa, recognized for their independence and competence. For the first time in its nearly 40-year history, this session of the PPT had an international focus, was hosted completely online, and included arguments about the rights of Nature in addition to the rights of people. https://www.tribunalonfracking.org/what-is-this-session-about/ Among the participants were Institute for Social Ecology board member Brian Tokar, Honor the Earth founder Winona LaDuke, 350.org founder Bill McKibben,and former industry insider, Dr. Anthony Ingraffea. 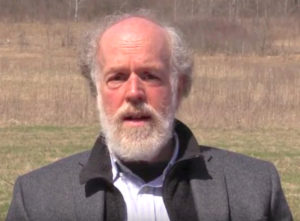 You can watch ISE board member Brian Tokar’s testimony here, along with comments by other participants in the recent campaign to halt a new fracked gas pipeline in Vermont, recorded at Geprags Park in Hinesburg, VT on May Day 2018.

Amicus briefs were submitted by attorneys and others representing nongovernmental organizations, including 350 Vermont, Food and Water Watch Europe, Freshwater Accountability Project, the Center for Human Rights and the Environment, Coalition to Protect New York, and Environmental Defenders Office. A team of human rights attorneys also presented live and prerecorded witness testimony and reports from preliminary tribunals held in areas where fracking is used in oil and gas extraction.

After examining evidence and hearing testimony, judges selected by the impartial PPT were asked to provide an advisory opinion on four central questions:

1. Under what circumstances do fracking and other unconventional oil and gas extraction techniques breach human rights protected by international law as a matter of treaty or custom?

2. Under what circumstances do fracking and other unconventional oil and gas extraction techniques warrant the issuance of either provisional measures, a judgment enjoining further activity, remediation relief or damages for causing environmental harm? 3. What is the extent of responsibility and liability of States and non-State actors for violations of human rights and for environmental and climate harm caused by these oil and gas extraction techniques?

4. What is the extent of responsibility and liability of States and non-State actors, both legal and moral, for violations of the rights of nature related to environmental and climate harm caused by these unconventional oil and gas extraction techniques?

The judges issued an interim opinion on June 6th, with a final advisory opinion expected to be out later this fall.

“The dictates of public conscience can become a recognized source of law and a tribunal emanating directly from the conscience of the people reflects an idea that is bound to grow. It is claimed that institutions derive their power from the people, but actually these two have moved further and further apart and only a major public initiative can try to build a bridge between the people and power”
-Lelio Basso (a founder of the PPT)