With nearly everyone trapped at home for the fiftieth anniversary of the first Earth Day, Michael Moore released a film that picks apart the US environmental movement as it may have looked ten years ago, and then misleadingly presents it as breaking news. That may be the most generous possible description of what “Planet of the Humans” offers. The award-winning environmental filmmaker Josh Fox called it irresponsible, “amateurish and puerile,” climatologist Michael Mann said it was filled with “half-truths and lies,” and it is apparently widely praised by advocates for the fossil fuel and nuclear industries. 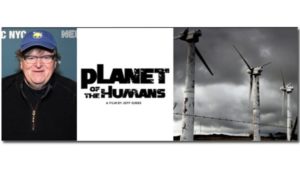 As someone who’s been writing critically about mainstream environmentalism since the lead-up to the landmark 1990 Earth Day Wall Street action – with research that eventually led to my 1997 book, Earth for Sale – I had hopes that the film, by Michigan filmmaker Jeff Gibbs with Moore holding the Executive Producer credit, might be something of an eye-opener. Instead, my view is more in line with an early critique by Tom Athanasiou of EcoEquity who wrote that the film is “[s]o bad that [even] its good points are useless.”

It’s useless in part because the film is conspicuously based on mostly ten year old footage, rendering even its more valid critiques of the movement sorely out of date. It is also misleading and highly manipulative throughout. While there’s no dispute, for example, that environmental alliances with venture capitalists like Richard Branson and even Al Gore were a distraction at best from the real work, the roles of such individuals and their entire way of thinking have significantly receded. To the extent that they still influence middle-of-the-road organizations like NRDC and the Nature Conservancy – both mentioned toward the end of the film – that’s still a problem. But the Sierra Club and 350.org, the two groups most aggressively targeted by Gibbs, have largely moved on and embraced a stronger focus on movement building and environmental justice, as Bill McKibben briefly outlined in his own response to the film.

The film’s better moments argue that we need to address the problem of excess consumption. And yes, we must find a way to curb excess resource use, especially by the wealthiest 10% of the world’s population, who are responsible for at least half of greenhouse gas emissions – and there likely won’t be a full conversion to renewable energy without doing that. If elites keep consuming without limit, the potential for a transition to solar and wind energy could indeed be undermined by problems of excessive resource and land use. But that is not what the film tells us. Instead Gibbs wrongly insists that we are all to blame, echoing some of the worst clichés of 1970s – ’80s era environmentalism. The film’s main thesis is that renewable energy is a sham, and that’s why it has been so widely condemned by people who are far more knowledgeable than the filmmakers.

Gibbs and friends’ assertions may appear credible, and even perceptive, to those who are not aware of recent trends. He and his interviewees insist that solar and wind energy are laughably inefficient, that they depend on an excessive demand for fossil-fueled backup or ‘baseload’ power, and that renewables can’t even demonstrate a net benefit, either in terms of energy output or resource consumption. These assertions are simply not true, as explained in detail in a review by nuclear disarmament expert Timmon Wallis in the online journal, Portside. Some of the claims may have been valid a decade or more ago, and Gibbs is mostly right about biomass energy, which has been fatally flawed from the start. But the cost and efficiency of solar power, in particular, have improved dramatically, and several European countries have demonstrated for years that the presumed need for backup or “baseload” power to compensate for the intermittency of renewables is entirely mythical, as perhaps best documented in a 2016 commentary by Mark Diesendorf of the University of New South Wales in Australia, as well as in his peer reviewed research articles.

Recent developments in renewable energy technology have also significantly reduced the estimated land area and the number of solar and wind installations that are likely to be needed for a thorough transition, and the cost of renewable power even with battery storage was beginning to approach that of fossil fuels before Covid-19 crashed the oil market. Researchers from the UK-based Carbon Tracker group have documented how the cost of solar electricity has fallen to one seventh of its 2010 price, and is now at the lower end of the price range for fossil fuel-derived power. The payback time for solar installations to compensate for the energy needed to produce them is also shrinking rapidly.

The most disturbing problems with the film, however, are political. The only mentions of capitalism are in terms of its purported “takeover” of the environmental movement. There’s nothing whatever about the system’s inherent reliance on the myth of endless growth, the massive waste it generates through excess production for profit’s sake, nor how it invariably privileges the few at the expense of the many. Instead the film preaches that “human presence” is what’s destroying the planet. “It’s us,” we’re told. Ever since Malthus in the 18th to early 19th century, that kind of blame-the-victims thinking has always evaded core systemic problems and targeted marginalized populations for further abuse and neglect. In the late 20th century, such an outlook led several leading proponents of deep ecology to blame immigrants for damaging “American” wildlands, and reactionary Malthusian thinking was also at the core of a failed effort by anti-immigrant ideologues to take over the board of the Sierra Club. It has long been clear that rapid population growth is a symptom of much deeper systemic causes, not a cause in itself of environmental destruction — an argument made most articulately by the Indian economist and philosopher Amartya Sen in his writings since the 1980s, and echoed by thinkers from Murray Bookchin to Vandana Shiva and countless others.

So while “Planet of the Humans” makes a few valid points about overreliance on techno-fixes in general and the fundamental flaws of biomass energy in particular, it does a serious disservice to those seeking to bring a more systemic and forward-looking approach into the climate movement. The film’s politics fail to reflect any of the insight and nuance executive producer Michael Moore has brought to so many of his other projects. In the end it will likely offer far more solace to the hucksters still trying to perpetuate fossil fuel and nuclear power dependence than to anyone seeking a saner, more livable future.

Brian Tokar’s latest book is a brand new international collection titled Climate Justice and Community Renewal (coedited with Tamra Gilbertson), available from https://www.routledge.com/Climate-Justice-and-Community-Renewal-Resistance-and-Grassroots-Solutions/Tokar-Gilbertson/p/book/9780367228491. E-books are now 35% off, and books are 50% off through May with the discount code, CJCR20.

[Note: for another critique of the film that’s informed by social ecology, see https://thenewmunicipalagenda.wordpress.com/2020/05/01/listen-malthusian-a-critique-of-planet-of-the-humans/]

Brian Tokar is an activist, author, and a lecturer in Environmental Studies at the University of Vermont. He is the author of The Green Alternative, Earth for Sale, and Toward Climate Justice, and edited three books on biotechnology and food issues, Redesigning Life?, Gene Traders, and Agriculture and Food in Crisis: Conflict, Resistance and Renewal (latter co-edited with Fred Magdoff). His latest collection, co-edited with Tamra Gilbertson, is Climate Justice and Community Renewal: Resistance and Grassroots Solutions (Routledge 2020). He founded the Institute’s Biotechnology and Climate Justice projects, initiated public events in response to the biotechnology industry’s annual conventions from 2000-2007 (see the biodev.org archive on this site), and has contributed to several other recent collections, including the Routledge Handbook on the Climate Change Movement (2014) and Handbook of Climate Justice (2019), Climate Justice and the Economy (2018), Social Ecology and Social Change (2015), Globalism and Localization: Emergent Solutions to Our Ecological and Social Crises (2019), and Pluriverse: The Post-Development Reader (2019).
View all posts by Brian Tokar →

New Social Ecology Comic!
When We Lose the Ability to Be Shocked, Fascism Has Already Arrived