On December 17th, several Vermont-based ISE board members presented a full collection of books by Murray Bookchin to the Vermont State Libraries, aiming to assure that his works will be readily available via the Interlibrary Loan service. We have also distributed large tabletop displays (see image below) to five selected libraries, along with a smaller selection of books and a printed annotated bibliography. This was

the culmination of a year-long project undertaken in honor of the centennial of Bookchin’s birth on January 14th, 1921. We are also facilitating the recording of oral history interviews by the Vermont Folklife Center, and continue to be in communication with potential host institutions with the goal of convening a major commemorative conference during 2022. A short video, produced by Joe Bookchin to accompany the library collection, can be viewed at https://youtu.be/5lY_f3P1ufY.

Here is the full text of the announcement that was released to Vermont media  outlets in anticipation of the December presentation: 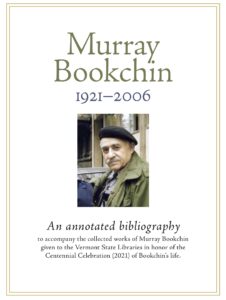 2021 marks the centenary of the birth of Murray Bookchin, one of Vermont’s most important intellectuals. Bookchin was a philosopher and social theorist, born in the Bronx, New York in 1921, and a Vermont resident from the 1970s until his passing in 2006. His book, Our Synthetic Environment, came out 6 months before Rachel Carson’s Silent Spring, which has been credited with starting the modern environmental movement. In an essay titled “Ecology and Revolutionary Thought” published in 1964, he warned of the probability of global climate change if we did not curb emissions of greenhouse gases. To celebrate the centenary, the Institute for Social Ecology (co-founded in 1974 by Murray Bookchin and Dan Chodorkoff), with the generous support of the Sustainable Future Fund of the Vermont Community Foundation, is donating a set of Bookchin’s published books to the Vermont Department of Libraries. The formal acceptance of the books by Tom McMurdo, Interim State Librarian, will take place on December 17th at 11:00AM at the department offices at 60 Washington Street, Suite 2, in Barre. We invite press and photographers to the event.

Bookchin first moved to Burlington in 1971, drawn to the state’s environmental ethic and its tradition of local town meeting democracy. His writing drew a direct link between top-down forms of economic and political organization and ecological degradation. He elaborated these ideas in a philosophy he called social ecology, and detailed a political practice based on the concept of direct democracy embodied in the Vermont town meeting tradition. Bookchin’s analysis of the social roots of the environmental crisis has proven to be prescient.

Bookchin went on to write hundreds of articles and 25 books, which influenced growing ecological and social movements in Vermont and around the world, including the anti-nuclear movement, ecofeminism, Green politics, the alter-globalization movement, Occupy Wall Street, and the climate justice movement. His work has been translated into more than 15 languages and provided ideas that have recently taken shape in municipalist movements that have gained political power across Europe, as well as in the Kurdish region of northern Syria known as Rojava, where 4 million people are living in a system of Democratic Confederalism inspired by Bookchin’s ideas.

Other centenary activities sponsored by the ISE include the creation of a brief video about Bookchin by Vermont filmmaker Joe Bookchin, and an annotated bibliography of Bookchin’s books, both of which will be featured on the Vermont Libraries website. A poster montage with additional sets of donated books will be on display and available for checkout at a number of local libraries. The Vermont Folklife Center is conducting oral interviews with Vermont activists and scholars who have been influenced by Bookchin’s legacy, and there been a number of international conferences and seminars dedicated to the contemporary exploration of his work. A conference hosted by the ISE, delayed due to COVID precautions, will happen in 2022.

Bookchin’s legacy lives on in Vermont and around the world. In 2021, his centenary year, the Institute for Social Ecology (social-ecology.org) invites Vermonters to become better acquainted with the work of this important thinker.