Review of Sugaring Down by Dan Chodorkoff 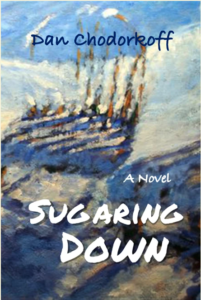 Drawing on his own youthful experiences, Dan Chodorkoff has crafted a portrait of young people caught up in the political and cultural upheavals of the sixties. The story unfolds over the course of two years in the remote Northeast Kingdom of Vermont, where the protagonist, David, and his girlfriend Jill arrive from New York with a collection of activist friends and hangers on. Determined to learn to live on the land and create a new model of social and economic relations, the political communards go through a series of trials and adventures in community building. The setting and era of the story are familiar to this writer, which rings true in its portrayal of the hardships and the joys of learning to survive in this harsh but beautiful new environment.

David and Jill evoke the combination of young energy, idealism, and naivete that drew so many of our generation to head for the hills of Vermont. While most of the narrative is from David’s perspective, Jill’s thoughts are interjected in italics when the inevitable relationship stresses emerge. The pace starts out slow and stumbling at times, mirroring the characters’ own mistakes as people come and go, hostile neighbors create conflict, and kind neighbors offer advice, helping the newcomers adapt to the reality of life in the “sticks.”

Chodorkoff’s own political and philosophical background as co-founder of the Institute for Social Ecology is introduced into the story through David’s inner dialogue. The politics of direct democracy, exemplified in the traditional Vermont town meeting that the group encounters in early March, figure prominently in the events that unfold. As Jill becomes more militant about taking action that will send notice that the revolution has arrived and inspire the oppressed masses to rise up and join them, David refuses to go along with the agenda of violence. He reflects on the satisfaction of growing food, getting in the firewood, and the peaceful silence of winter, going out on skis with his devoted dog Ranger for companionship after everyone else has abandoned the effort of staying warm through the long dark months. As the days begin to warm he helps their neighbor make maple syrup, which process of distilling the sap into syrup supplies the title of the book.

Tension and danger increase rapidly in the last few chapters of the story, with a shocking ending that leaves the reader with a clear understanding of the depth of David’s integrity and willingness to take the most ethical course at a painful cost.