How can we sustain a commitment to revolutionary possibilities in a world consumed by near-daily violations of our basic humanity? From racist shootings, war in Ukraine and the assault on abortion rights and other personal freedoms, to escalating climate-related catastrophes and the continuing Covid-19 pandemic, it can be difficult not to feel overwhelmed by these continuing horrors and more. But we know that our movements thrive the most when there is also a sense of hope that our efforts can create positive and transformative change.

That understanding was a persistent current throughout the first northeast regional gathering of the Symbiosis federation, which was held in late May at the storied Woodbine community center in Ridgewood, Queens, a multi-ethnic neighborhood in New York City. Titled “A Regional Gathering on Autonomy and Survival,” it was truly a unique and impressive event. It was also the first in-person gathering sponsored by Symbiosis since the founding North American Congress of Municipal Movements back in September of 2019. Between 50 and 100 people attended the various sessions over the course of the weekend, with roughly half from the NYC area, a dozen or 2 people from across the country, and the rest from New England and Montreal. The main unifying themes traced many people’s involvement in leading-edge community mutual aid work during the pandemic, and participants were also united by a strong left-libertarian outlook rooted in municipalism, autonomy and aspirations toward a broadly defined communalist politics. 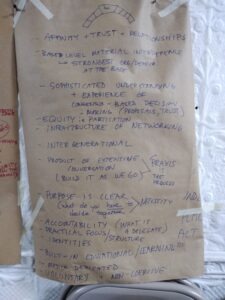 The agenda was deliberately kept simple, with plenty of time for informal gatherings in between sessions.  The event began with informal introductions on a Friday afternoon, followed by an opening panel featuring Symbiosis-affiliated organizations from the region and beyond, including the DSA Libertarian Socialist Caucus, Black Socialists in America, the Upstate (NY) Living Assembly, the Institute for Social Ecology and Symbiosis affiliates from Boston, Montreal and Portland, Oregon, along with our hosts. Saturday morning featured small group discussions on core principles of autonomy, survival, confederalism and dual power, followed by breakout discussions on municipalism, technology, health and land.  Saturday evening’s panel featured stories of exceptional mutual aid efforts around the region and beyond.  Sunday had two sessions: a morning panel on the Zapatista and Kurdish movements – mainly featuring local activists, some of whom had spent significant time in both Chiapas and Rojava – and an afternoon strategy session on next steps for the regional network.

The breadth of on-the-ground experience and depth of commitment to core anti-authoritarian principles among the participants was truly inspiring. During the pandemic, autonomous groups in a wide variety of settings have gained experience organizing large teams of volunteers, providing food and other basic needs to people who need it the most, and circumventing the constraints of supply chain bottlenecks. At least one person had even learned how to move container loads of goods around the world, all with donated funds.  There was a lot of technological sophistication and, above all, a solid commitment to radical organizing from below and fulfilling essential needs in situations where established structures are clearly failing.

The focus was overwhelmingly positive and forward-looking. While everyone is clearly very aware of the troubling times we face, there was a refreshing lack of the usual griping about the system’s failings, instead focusing on what can be done “from the left and below” (a slogan of the Mutual Aid Disaster Relief network, which was also represented) to act despite those failings. Active participation from Latinx, Asian-American and Black folks was also substantially higher than at most such gatherings in our region — not quite reflecting the demographics of NYC or especially Brooklyn-Queens, but far beyond the usual composition of most US left gatherings.  There were more positive indications for where our movements may be heading than I think many of us have seen for quite some time, and a thoroughgoing commitment to envisioning ways forward that can reach beyond the limits of capitalism and the state.

Brian Tokar is a long-time faculty and board member of the ISE, a lecturer at the University of Vermont and the author and editor of seven books on ecological politics and movements, most recently Climate Justice and Community Renewal (co-edited with Tamra Gilbertson, Routledge 2020).