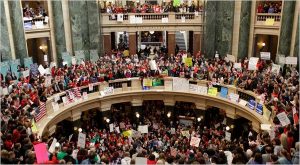 Brian T. commenting on Matt H.’s “Neoliberalism and the Politics of Social Ecology”:

Right wingers continue to attack ‘big government’ and aim to drastically reduce its size while, with few exceptions, supporting the continuing build-up of the repressive apparatus. My question is whether it’s conceptually feasible to do the opposite: to support the safety net, and also public services in general: to defend the public sector just as Murray emphasized the integrity of the public sphere in society. Can we make a meaningful separation between the public sector and what we commonly refer to as the state, which in the antiauthoritarian tradition focuses mainly on its military and police functions?

Our preference may always be for locally controlled and administered efforts, but we also want to make sure people don’t fall through the cracks in places where reactionary forces are (we hope temporarily) in control. Consider the case of Wisconsin, where a new right wing governor seeks to balance the state budget at the expense of state workers and has threatened to call out the National Guard in response to any labor action or ‘meeting.’ I don’t know if there are any active social ecologists in the Madison area (as there have been in the past), but if so, I hope they would be united in support of the state workers, teachers and students who have been out in the streets and packed the state house in large numbers this week.

“Wisconsin in near-chaos over anti-union bill” from the LA Times.

6 Replies to “Consider the case of Wisconsin…”