This commentary by Brian Tokar will appear in the winter issue of Broadcast, the newsletter of SEEDS, the Social Ecology Education and Demonstration School, based in Seattle and Vashon, Washington: 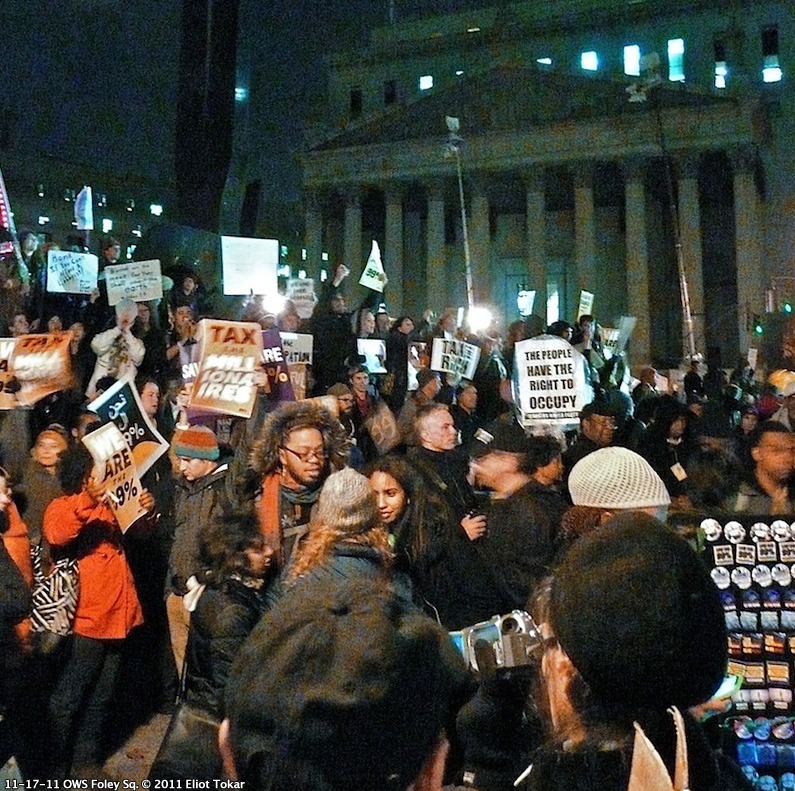 Since mid-September, actions inspired by the Occupy Wall Street encampment in New York have awakened the imaginations of people worldwide. Just as the movement approached its two-month anniversary in mid-November, several of the founding Occupations across the US fell victim to apparently highly-coordinated police raids. While the coming of winter was long-predicted to shift the focus of the Occupy movement, the expulsion of iconic tent encampments in New York, Oakland, and other cities has invigorated and intensified discussions about the movement’s next steps and its longer-term strategies.

Inspired in part by the Arab Spring events in Tahrir Square and beyond, the Occupy movement initially focused on the physical occupation of public space. But it’s always been about much more than that. The transcendent quality of the physical occupations was elaborated in a recent commentary by the Cincinnati-based author/activist Dan LaBotz, originally written for the journal New Politics. He described in rich detail how this fall’s Occupations resonate with the long history of popular revolts and occupations of public squares that, since ancient times, were often rooted in the utopian dimensions of the city itself. His outlook strongly resonates with social ecologist Murray Bookchin’s efforts, beginning in the mid-1960s, to reclaim the city’s historic legacy of freedom for today’s revolutionaries.

“We are witnessing something that goes beyond the symbolic,” LaBotz wrote, “something that both threatens the deep foundations of our social structure and, equally important-no, more important- something that touches our deepest spiritual yearnings. The occupation is utopian in the best sense. Whatever its political program, its practice says: ‘We will no longer live in hatred and competition. We will live in love and community.’”

Even the Occupy movement’s oft-criticized resistance to focusing on achievable, short-term “demands” speaks to its long-range, utopian character. Rolling Stone reporter and long-time critic of Wall Street’s excesses, Matt Taibbi describes how, after some initial skepticism, he was soon won over by Occupy Wall Street: 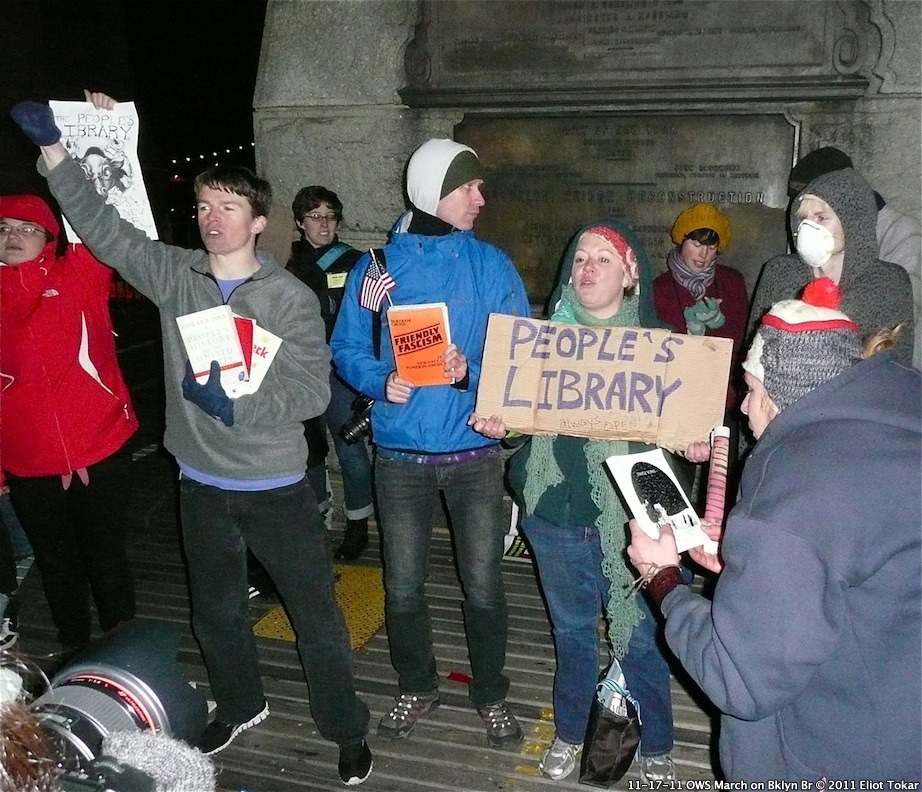 “Occupy Wall Street was always about something much bigger than a movement against big banks and modern finance. It’s about providing a forum for people to show how tired they are not just of Wall Street, but everything. This is a visceral, impassioned, deep-seated rejection of the entire direction of our society, a refusal to take even one more step forward into the shallow commercial abyss of phoniness, short-term calculation, withered idealism and intellectual bankruptcy that American mass society has become… We want something different: a different life, with different values, or at least a chance at different values.”

For some 30 years, the progressive Left in the US has been on the defensive. Against a unified, ideologically-driven assault against all of the social progress of the twentieth century, we’ve learned to fight one battle at a time, to “frame” our issues carefully and often circumspectly, and to try not to rock the boat too much. We have been up against a sometimes frightening confluence of neoliberal economic policies – privatization, deregulation, shredding safety nets, reorienting economies toward global trade – and a fundamentalist “culture war” that has mobilized significant numbers of disenfranchised people in a reactionary crusade to defend “traditional values.” We’ve insisted that “another world is possible,” but often only believed it in the most abstract of terms.

Now, for the first time in decades, the terms of the conversation are shifting. People are fed up, and no longer too timid nor too defeated to speak out loudly against the status quo, and for a different kind of society. We have learned that we can challenge financial elites, defend labor rights, call to overturn capitalism, and our numbers continue to grow. In cities large and small, we experience the exhilaration of direct democracy, of reclaiming public spaces, and of reinventing our future. And we know that we are not going to disappear when elites respond with too many police, or even with small victories.

This movement, with its unbounded creativity, is going to decide its own future. Some trade unionists, Move-On bloggers, and people tied to the Democratic establishment want it to be about the 2012 congressional elections and about reclaiming the long-discredited “American dream.” Some movement participants will, understandably, choose to become involved in the elections. But, for the first time in recent memory, the election may not turn out to be the center of our attention. Instead of a movement narrowing its sites to elect candidates, the candidates may just have to listen to the much farther-reaching demands of this movement. If they don’t – if they instead continue to harp on deficits, budget cuts, and reforms constrained by the demands of Wall Street – they’ll simply make themselves irrelevant.

Occupy Wall Street and its counterparts across the country and around the world have exposed the underside of an economic system that only benefits the wealthiest 1 percent – or less – and begun a new, potentially revolutionary conversation. With the coming of winter, it will evolve in many directions: toward occupying abandoned urban spaces, confronting politicians and CEOs, intervening against foreclosures, organizing university campuses, and more. The movement – and its emerging vision of a different kind of world – will continue to grow and evolve.

In a recent ZNet column, activist scholar Marina Sitrin described what it’s like in Spain today, in the aftermath of their summer 2011 uprising. “[W]hile the indignado movement no longer has encampments, its presence is felt everywhere,” she wrote, most notably in a new flowering of cooperatives in all spheres of life. It has evolved “to the point that in some places in Spain it is almost possible to live without having to depend on the resources hoarded by the 1 percent.” Perhaps not since the anti-nuclear power actions of the 1970s have we seen a movement so dedicated to uniting the oppositional and reconstructive dimensions of radical politics. As snow begins to blanket the North (and the rainy season arrives in the Northwest), we can already feel the anticipation of the Spring awakenings to come.

Brian Tokar is an activist, author, and a lecturer in Environmental Studies at the University of Vermont. He is the author of The Green Alternative, Earth for Sale, and Toward Climate Justice, and edited three books on biotechnology and food issues, Redesigning Life?, Gene Traders, and Agriculture and Food in Crisis: Conflict, Resistance and Renewal (latter co-edited with Fred Magdoff). His latest collection, co-edited with Tamra Gilbertson, is Climate Justice and Community Renewal: Resistance and Grassroots Solutions (Routledge 2020). He founded the Institute’s Biotechnology and Climate Justice projects, initiated public events in response to the biotechnology industry’s annual conventions from 2000-2007 (see the biodev.org archive on this site), and has contributed to several other recent collections, including the Routledge Handbook on the Climate Change Movement (2014) and Handbook of Climate Justice (2019), Climate Justice and the Economy (2018), Social Ecology and Social Change (2015), Globalism and Localization: Emergent Solutions to Our Ecological and Social Crises (2019), and Pluriverse: The Post-Development Reader (2019).
View all posts by Brian Tokar →

One Response to What’s Next for the Occupy Movement?