Author and acclaimed scholar of horizontalist movements, Marina Sitrin, reflects on discussions at the recent Left Forum in New York City. She encourages those who’ve participated in movements such as Occupy Wall Street, 15-M in Spain, and Gezi Park in Istanbul to familiarize themselves with municipalist ideas to better address the huge organizational challenges faced by the global left. This article originally appeared on TeleSur English:

How can we change society so as to run it ourselves, horizontally, based in assemblies using forms of direct democracy? 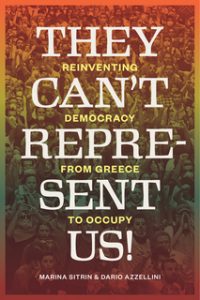 I believe the two biggest challenges facing the radical and revolutionary left are that of organization and structure. I am not alone in this belief. It is not a “new” historical question either. It is, however, a unique moment in history – one filled with revolutionary possibilities. Millions of people around the globe have been rejecting the politics of representation and hierarchy and at the same time manifesting alternatives in parks, squares and plazas, using forms of direct and participatory democracy. Assemblies have been organized with dozens, hundreds and sometimes thousands of people, where each person gets to share what they are thinking and feeling, for most this is the first time in their lives they feel heard – really listened to – as if their ideas matter. These experiences have been tremendously powerful – though often only lasting days, weeks or months. How can we create this feeling in an ongoing way and one that is meaningful not only to us as individuals and smaller groups, but society as a whole? How can we change society so as to run it ourselves, horizontally, based in assemblies using forms of direct democracy? Is there a role for elections in this process?

I recently attended the Left Forum in New York – a conference that brings together a few thousand radicals and revolutionaries from various backgrounds and belief systems. This year’s conference was organized around the themes of Justice, referring to the Black Lives Matter movement, and the recent electoral victories of SYRIZA and Podemos. The intention was to think both about movements from below and the possibility of change through elections and the state. I was fortunate to have participated in two panels that addressed just these questions. While there were no “answers” to come out of the conversations by the end of the weekend, the questions and challenges before us today were posed more sharply.

The first panel was on the question of the relationship of autonomous movements and left political parties, and the second on the book, The Next Revolution: Popular Assemblies & the Promise of Direct Democracy, a collection of Murray Bookchin’s writings, including many never before published essays. Ideally they would have happened one right after the other so that the questions raised in the first discussion could flow into the second, but unfortunately they did not. Nevertheless both discussions were interesting and confirmed for me the useful nature of this book in thinking through many of the questions related to strategy and organization. In our first discussion many questions and challenges were raised to the idea of building a political party, even one comprised of the most radical of leftists, so as to change society. A few of us, myself included, even shared that we were not thrilled that movement people were building such parties, and fear what this might mean for the horizontal movements on the ground, particularly in Greece and Spain, though also grounding the experiences in Argentina and Uruguay. (Panel participants were from a few of these countries and we had first hand experience in each.) This does not mean that anyone was opposed to the left winning elections on any level, we all agreed that it could make for more space for movements – if they/we took advantage of this space. This then opened the discussion of whether or not movements in these places, Greece, Spain, Argentina and Uruguay used the spaces opened by the electoral victories. While the answer is for sure yet to be seen in Spain as the victory just took place, in Greece, it is now a number of months since SYRIZA won the elections the movements generally are still in a “waiting” mode. This waiting is something that movement participant after movement participant shared with me, explaining the reasons sometimes differently, but the result is the same. Waiting is something that I fear, and something that in Argentina and Uruguay has led to the governments being the ones to set the political agenda, not the movements.

The panel ended in a sort of, “ok, so then what?” place, where many of us agreed that our energy would be better spent outside the national political party structure, something Murray Bookchin refers to as statecraft, and instead in continuing to build from below. So … what might that “from below” look like? A few people shared examples from their local organizing, especially in defense of the land, such as with Idle No More in Canada or with the movements in Argentina, describing not only local movements that organize horizontally, based in assemblies and with participatory democracy, but also how they are connecting with one another and in some places creating the beginnings of alternative means of survival. This opened the conversation into more of a direction of what power from below could/can look like – how we can organize together without having to elect representatives to speak for us and yet do more than just talk. There were also some concrete suggestions made with regard to relationships between autonomous movements and electoral processes, such as finding ways to get candidates to make binding agreements with the movements before being elected, such as participants in the PAH, the housing movement in Spain have done with Podemos. This suggestion was made so as to be able to focus more on deepening our collective power from below rather than participating in electoral processes, thus not taking time away from the movements, or ignoring the electoral process. It was one of a few creative suggestions for finding ways to use left political parties for the benefit of the movements.

And then the second panel took place, which was organized around the essays in the new book out by Verso, The Next Revolution: Popular Assemblies & the Promise of Direct Democracy. This panel was focused more on participatory democracy and how we can change society from below, without going through national elections or representative democracy at the nation state level, and instead create local and municipal assemblies, sometimes using local elections, and then confederate them to create a dual power situation. Debbie Bookchin, the co-editor of the book with Blair Taylor, and daughter of Murray opened the discussion with a wonderfully clear account of some of his writings, and an overview of many of the thoughts raised in the book. Then a participant, skyped in from Turkey, discussed the history of the PKK and its shift to the creation of an assembly based society grounded in participatory and direct democracy. She shared her experiences in Kobani, one of the cantons of the autonomous region of Rojava, and the ways in which they are building a directly democratic governance structure, based to a large extent on the ideas of Murray Bookchin. I shared a few questions coming out of Occupy and the Movements of the Squares around the world and then we had a discussion. 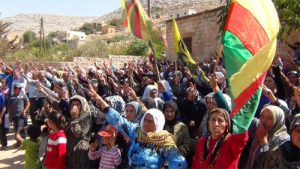 The conversation was a bit all over the place as it is very difficult for many of us to imagine what an assembly based direct democracy could look like — even with the participation of a person in Kobani, where thousands are living this reality. Imagining regular people – us – running society is hard for many people to do, even though it is something so many of us aspire to. The essays in the book around which the panel was organized help in this imagining. The Next Revolution is the most useful book I have read since participating in Occupy Wall Street. I don’t usually do this, in fact I can’t remember ever having suggested one book to help answer such a massive question as what is next for the movements, but I am now. These essays are incredibly insightful on the questions of organization, structure and what could be next for our horizontal movements. While I like and respect Debbie and Blair, the co-editors of this volume, and believe it is not a coincidence that they put it together based on their politics and dedication to changing the world, I do not write this for any personal motivation other than it has helped me think through the questions of organization and structure of not only a democratic movement, but an entirely new and alternative society based in the same principles. I believe this book with help others, as it has helped and is helping me think through this political moment.

It is not a coincidence that this collection has come together as it has. Murray has written volumes over his lifetime, but this selection is very specific on the question of popular assemblies and how to go from assemblies to the construction of power – a power to replace the state and one that does not include national elections. It was compiled as the massive assemblies around the world were either evicted from the squares (such as the US and Turkey) or intentionally shifted focus and energy into the creation of neighborhood assemblies (such as in Greece and Spain).

Many of us within the movements, from the US to Greece, Spain and Turkey argued from the inception of the movements for the construction of local assemblies, based in neighborhoods, workplaces and schools. Our intentions were good, and even took effect in a number of regions of the world, sometimes with the emergence of many dozens of assemblies. One of the reasons this phenomenon did not take off more broadly was the lack of a clear theoretical and practical explanation as to why we should decentralize the assemblies of the plazas. What sort of democracy were we talking about? What could society look like run locally and in a confederated manner?

This collection of Murray’s writing addresses these questions, using history and theory to support the argument for the construction of a democratic society from below, based in local assemblies that then confederate to create local, regional and national governance structures. Murray uses the concept he developed of libertarian municipalism to address the political project that is the part of Communalism, a project that he sees grounded in taking over the local – the municipal – including by means of local elections. It is crucial to stress here that the focus is local and assembly based. The argument of libertarian municipalism is not and never was intended to defend statecraft, that form of politics that looks to the centralized state as something to take through elections or otherwise. In the chapter on this question he systematically goes through not only the concept but the arguments against it and presents reasons, theories and historical examples so as to defend it.