Norwegian social ecologist Sveinung Legard has drawn our attention to his recent article on the New Compass website. In this piece, he aims to address some of the arguments raised …

It is time to question the ideology of job creation that holds sway in most discussions of so-called economic development… The real mark of economic health is not merely that firms in a given municipality are hiring. Economic health is when the basic economic functions of society make ours a healthier place to live – a place with less war, less disease, more ecological health and justice.

“Floreal Romero, who lives in Spain, sent me this link to his lecture in France in June. Some of you have met him in Lisbon [at the international libertarian municipalism conference] in 1998… It’s interesting because in my opinion it is the first video in French about social ecology… !”

Popular Assemblies in Revolts and Revolutions

A new article by Norwegian social ecologist Sveinung Legard offers a thoughtful historical assessment of the re-emergence of popular assemblies in Europe this spring and summer: “These assemblies derive not … 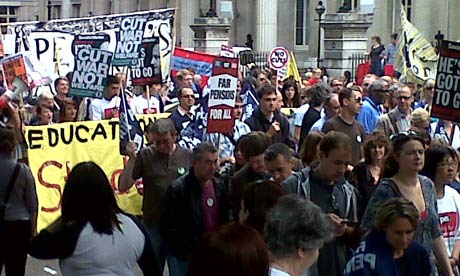 Written the day before the June 30th general strike, this article examines the rising repression against protests in the UK, the historical mindset that makes it possible, and how people are continuing to resist. British unions were predicting a walkout of as many as 750,000 people to protest budget cuts and drastic changes in the public pension system […]

A new politics in Greece?

Social ecologist Peter Prontzos recommends a report on the continuing street protests in Greece, in response to the austerity plan passed by the Greek Parliament this week. The article explores …

New from Argentina: “Anti-Capitalism for Beginners”

Just out in English from Seven Stories Press. The author, Ezequiel Adamovsky, was interviewed this week on ZNet. Here’s an excerpt:

“Initially, the idea came to my mind in 2002. At that time, after the rebellion of December 2001 in Argentina, I was very much involved in the Neighbors’ Assemblies movement. We had all sorts of amazing political debates there. Most people had the feeling that the old Left had little to offer. And yet, they were craving for radical ideas and actions. There was the sense that we were building a new kind of movement, but there were no ideas, concepts or doctrines to name it […]

So far only in French, at http://www.monde-libertaire.fr/ecologie/14178-les-trois-facettes-de-lecologie-sociale. Vincent also manages the French language social ecology web portal, www.ecologiesociale.ch. The site has an RSS feed that aims to inform subscribers of …